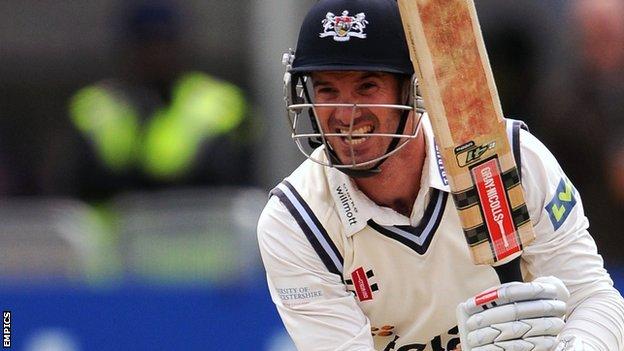 Michael Klinger struck 129 not out as Gloucestershire successfully chased 251 to beat Leicestershire at Grace Road.

Angus Robson, younger brother of England Test call-up Sam, hit 96 as Leicestershire reached 241-5 before opting to declare and set the visitors 251 to win off 39 overs.

Klinger and Benny Howell (78 not out) led their side to a fine nine-wicket victory with 10 balls to spare.

It might have been different for the hosts had Klinger not been dropped twice, on 77 and 114, but his unbeaten 129, which came off 124 balls and included 14 fours and two sixes, helped Gloucestershire reach their target with a degree of comfort.

He was ably supported by Howell, whose eye-catching 59-ball innings featured seven fours and three sixes - the last of which took his side past the winning post in some style.

The result means Leicestershire are still seeking their first Championship win of the summer, having losing eight and drawing eight of their 16 games in 2013.

"What an amazing victory for Gloucestershire.

"The game seemed to be meandering towards a draw when Leicestershire declared, perhaps a tad generously, and right from the start Michael Klinger set about his work with focus and a steely determination.

"His season thus far had been disappointing with only one score over 50, but he played beautifully and with proper cricket shots as he led the assault from the front.

"Alex Gidman gave the charge a solid start, but it was Benny Howell who partnered Klinger to victory with a brutal 78. Gloucestershire only had nine batsmen as well with Tavare and Dent missing.

"A positive result from a positive day's cricket from both teams."