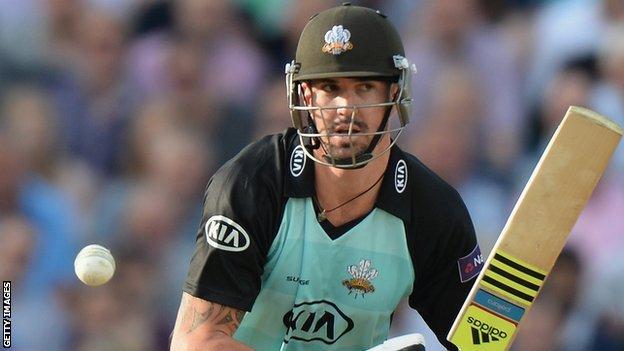 Kevin Pietersen only scored five in his first game in England since being discarded by the national team as his Surrey side failed to defend 151-6 and lost by five wickets against Essex.

Pietersen faced just eight balls on his return from injury before he was caught off the bowling of Ravi Bopara.

Surrey went on to surpass 150 - largely thanks to a fine 57 from Jason Roy.

But Jesse Ryder smashed a rapid 31 and Tom Westley (44) and Ryan ten Doeschate (43no) guided the visitors to victory.

Ryder smashed 31 off 16 balls at the top of the Essex innings as the visitors got ahead of the run rate.

Some brilliant bowling by Pakistan all-rounder Azhar Mahmood - including a wonderful 11th-over maiden - put the game back in the balance.

But some nerveless batting by Westley and Ten Doeschate ensured the visitors made 155-5 with seven balls left to claim their third win from four games in the T20 Blast South Group.

Earlier, Surrey opener Roy smashed six fours and a six in his 44-ball knock, but his only noteworthy support came from Gary Wilson, who hit 45 from 38 deliveries.