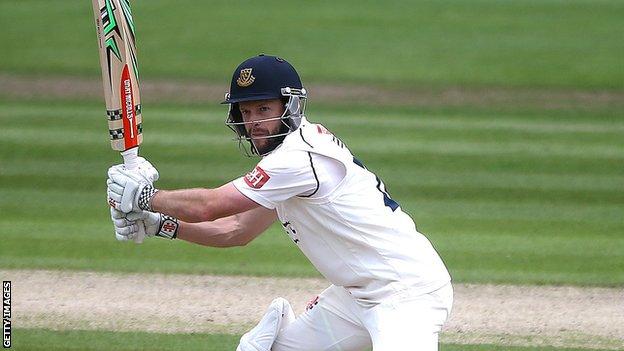 Ed Joyce continued his good form to provide resistance as Somerset's bowlers dominated Sussex on day one of their Division One match at Taunton.

Matt Machan (30) and Luke Wright (24) added some runs in the middle order before both men played on.

Rain interrupted play and Sussex reached 210-9 at the close with Joyce stranded on 99 not out.

The day could have been completely different had Somerset wicketkeeper Craig Kieswetter, diving in front of first slip, held onto an edge with Joyce yet to score.

Instead, Joyce was once again the backbone to the Sussex innings, finishing just one run short of his fourth first-class century of the season.

Despite his efforts, Somerset are undoubtedly on top and will look to wrap up the innings early on the second morning.

"A missed catch was possibly the pivotal moment on day one at Taunton, as Sussex skipper Ed Joyce, having chosen to bat, came in with his side in trouble at 10-2.

"Before he had scored, he edged a ball from Peter Trego that looked certain to carry to James Hildreth at first slip. A diving intervention from wicketkeeper Craig Kieswetter proved unsuccessful and Joyce ended the day unbeaten, just one run short of what could be his fourth Championship century of the summer.

"Some 18 overs were unexpectedly lost to rain, but when they were out there, Somerset's bowlers stuck to their task well, finding lateral movement under cloud cover.

"Trego was the pick, but Alfonso Thomas regularly passed the bat and Craig Overton was steady. Watching how the Somerset batsmen deal with the conditions tomorrow will be an intriguing experience."

"Yet again Ed Joyce held the Sussex innings together, and without him Sussex could already be out of this match.

"Given a life before he had scored, Joyce admitted he 'had a lot of luck'.

"The skipper, who played out the penultimate over of the day for a maiden when on 99, paid credit to the Somerset bowlers who used the conditions well.

"Having won the toss, Sussex will be disappointed with their total. However, on a wicket offering encouragement to the bowlers, they are far from out of this game."