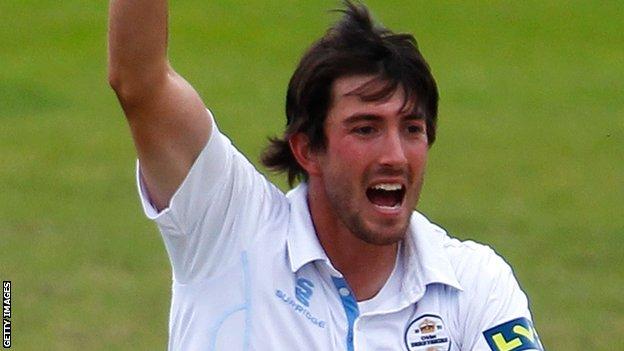 Footitt took 6-65 and Tony Palladino picked up the other four wickets as the hosts were bowled out for 311.

After being reduced to 11-3, Niall O'Brien hit a fine 89 and Josh Cobb and Ben Raine both struck half-centuries, but the hosts lost their last four wickets for 13 runs after O'Brien fell.

Stephen Moore and Paul Borrington then helped Derbyshire to 12-0 at stumps.

Footitt's excellent bowling display came on the day fellow fast bowler Tim Groenewald announced he will leave Derbyshire at the end of the season.

The 30-year-old, who has played 72 first-class matches for Derbyshire and taken 229 wickets, will be allowed to speak to other counties straight away after the club waived their right for 28 days notice.