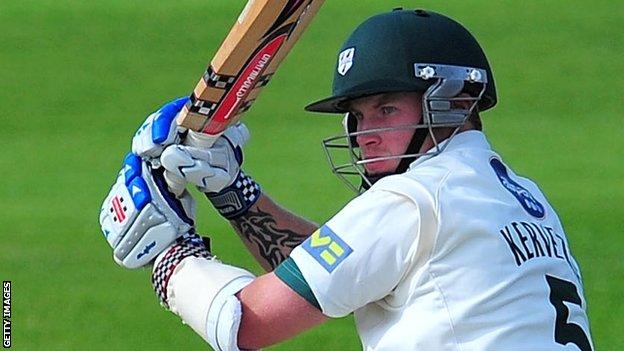 Worcestershire's Alexei Kervezee hit a fine unbeaten half-century on a tricky New Road pitch to help his side to 175-4 on a rain-hit day against Hampshire.

Kervezee struck seven fours and a six in his 65 not out but he was the only batsman to get going on a track still recovering from the winter floods.

The returning David Balcombe picked up 2-26 for the visitors, while Matt Coles and James Tomlinson took a wicket each.

Ben Cox was 14 not out at the other end when rain forced an early finish.

Despite the slow nature of the wicket, Worcestershire's batsmen will be disappointed at not going on, as all four dismissed reached double figures, including the country's leading Championship run-scorer Daryl Mitchell (12).

The result of the clash between the top two sides in the Division Two table could go a long way to deciding who gets promoted as, after making unbeaten starts to the season, both teams have already built up a big lead over third-placed Gloucestershire.

"A fairly even day on a pitch that was never easy to bat on, and against a Hampshire attack which bowled a good line and length.

"David Balcombe, in particular, looked the part, putting a dent in Daryl Mitchell's golden form with the bat.

"Alexei Kervezee seems to have captured some of his form of two years ago and, if he can help Worcestershire past 300, he will have done a good job for his team.

"It was a pity that the rain came back to end what could have been an interesting last session."