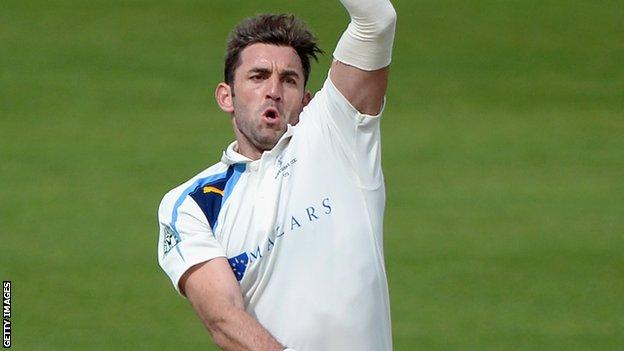 The squad which England have selected for the first Test against Sri Lanka at Lord's on 12 June was what most people expected - and I was particularly pleased to see Liam Plunkett in there.

The 29-year-old Yorkshire bowler has not played a Test for seven years, but he has forced his way back in through the sheer weight of his performances in county cricket.

He is bowling fast and I'm all for people forcing selection, because it's really important to energise county cricketers by letting them know they all have a chance of playing for England.

Plunkett first broke into the England team a little bit too young. He was only 20 when he made his Test debut against Pakistan in Lahore in 2005, and he was not fully developed.

In the years since his last appearance for the national team, many of us thought we would not see him again.

However, he has moved counties from Durham to Yorkshire, where he is used differently. They see him as a shock bowler with genuine pace.

Plunkett has been selected ahead of Ben Stokes, who the selectors do not believe is back to full fitness after he missed the World Twenty20 in Bangladesh with a hand injury.

He has only bowled 36 overs so far this season and England don't consider that is enough to get through back-to-back Test matches.

Stokes might be frustrated, but it's a long summer and he's a relative newcomer so you can understand why they have been patient with him and also why they have given Plunkett a go. Stokes will be back.

With Plunkett, the uncapped Chris Jordan and Stuart Broad all capable of bowling at a decent pace alongside the experience of James Anderson, it looks a pretty formidable seam-bowling attack.

I'm a little bit more worried about the spin bowling department. Can Joe Root and Moeen Ali really bowl a Test team out on the fifth day?

However, saying that, I suspect the pitches will be loaded to favour seam bowlers a little more than they were last year. England will then use part-time spin bowlers Moeen or Root for a little bit of variation, which is a definite change in direction.

I think Sam Robson is the right man at the top of the order, alongside skipper Alastair Cook, and I would not be surprised if Gary Ballance bats at three, Ian Bell at four and Joe Root at five.

I am looking forward to seeing how this new-look England side go under Peter Moores. Sri Lanka showed in the one-day series they did not like Jordan running in hard at them, so it will be interesting to see how they get on with Plunkett bowling quickly, too.