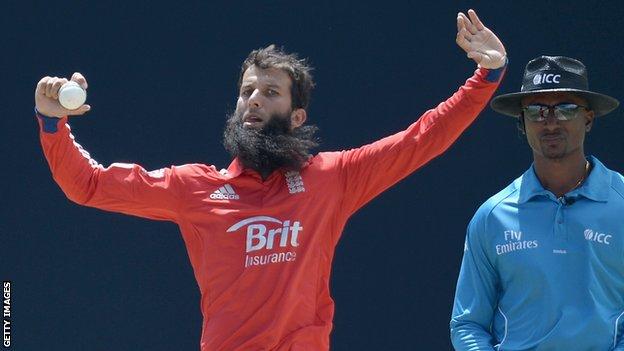 Moeen Ali is not yet ready to become a frontline Test spinner, according to former England spin-bowling coach Mushtaq Ahmed.

Worcestershire all-rounder Moeen, 26, has been named in England's Test squad to face Sri Lanka at Lord's on 12 June and is expected to supplement a four-man pace attack with his off-spin.

"It's a bit too early for Moeen," said Muhstaq, who took 185 Test wickets.

"I'm not sure, as a spinner, he is ready for a five-day Test match."

Moeen, who has already made his England debut in both limited-overs formats, was named Player of the Year by the Professional Cricketers' Association last season after scoring more than 2,000 runs in all forms of the game and taking 55 wickets with his off-spin bowling.

On Simon Kerrigan: "England need to work with him because in international cricket the DRS system can benefit left-arm spinners, especially in Asia where the pitches are slow and low and you can get lots of lbws. After his first Test for England, I saw he had a good temperament. He had a bad start but the way he reacted and handled that day, I was very impressed."

On Scott Borthwick: "He is a three-in-one cricketer, like Adil Rashid, in that he can bat and bowl well and is a good fielder too. He is a proper spinner of the ball."

His bowling has improved in the last few seasons, helped by the guidance off Worcestershire's overseas player, Pakistan off-spinner Saeed Ajmal.

While ex-Pakistan leg-spinner Mushtaq is convinced Moeen has the temperament and ability to become a success in the five-day format, he does not believe England should expect him to shoulder the bulk of the spin-bowling responsibility.

"He will be a good batsman and a very good second spinner," said Mushtaq. "He does have potential. He can spin the ball, he can drift the ball and he is learning the doosra. I was very impressed with him when I worked with him at the T20 World Cup.

"People can grow and become a good spinner, but when you are a number six batsman and also bowling, I don't think you can do both things very well."

England are now looking for a long-term replacement for Graeme Swann, who took 255 wickets in 60 Tests before retiring midway through the disastrous winter Ashes series which the tourists lost 5-0.

"Any team which wants to become number one in Test cricket needs a match-winning spinner," added Muhstaq.

"A team can have six good months, but to stay in the number one position for three of four years you need a good spinner.

"In the last couple of years, I have had good communication with the academy coaches and they are very keen to spend more time looking at the spin department."

"You don't need lots of spinners, just four or five who you can develop," he said.

"If England can look after those three and make them strong, I think they can do a great job and take lots of wickets."