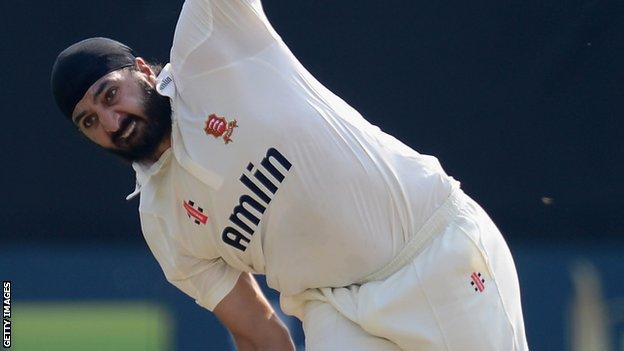 Essex spinner Monty Panesar will not play in Friday's T20 Blast match against Surrey, after already being dropped for this week's Glamorgan game.

The 32-year-old missed out in the County Championship fixture for "breaching team rules for timekeeping", but was expected to return on Friday.

The bowler has also been left out of England's squad for the first Test with Sri Lanka at Lord's on 12 June.

"I think Monty Panesar has a few things to deal with off the field. When they are sorted, I wouldn't be surprised if he comes back [into the Test side] because he is a world-class spin bowler."

"But he will be back in the squad for the four-day game with Kent [which starts on Saturday]."

Panesar, who has played in two out of three T20 games this year, joined Essex on loan from Sussex last summer after being fined by police for urinating on nightclub bouncers, and subsequently agreed a two-year contract at Chelmsford.

This season he has taken 19 Championship wickets in six games at an average of 23.63, including his best figures for Essex of 6-111 against Leicestershire.

But he was replaced for the rain-affected draw with Glamorgan by Tom Craddock, who finished with figures of 1-53.

Grayson suggested Panesar's absence proved costly, particularly on the final day, when Essex struggled to bowl out the visitors.

"We missed Monty's spin on Wednesday. He could probably have forced something had he played," he said.

"But I thought the lads were outstanding and gave a great effort."