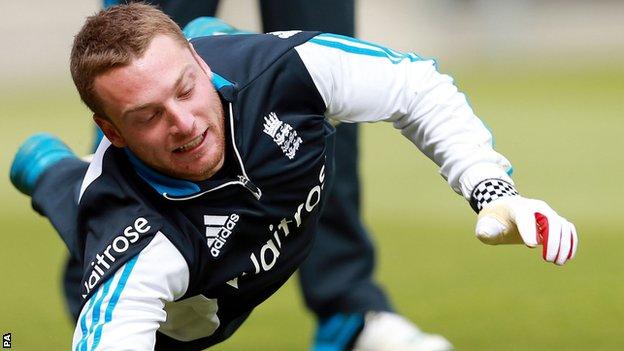 Lancashire wicketkeeper Jos Buttler says he needs to improve if he is to play for England's Test team.

But Matt Prior was recalled for the first Test against Sri Lanka on 12 June after being dropped for the final two matches of the Ashes tour to Australia.

"I've got some improvements to make in both sides of my game," Buttler told BBC Radio 5 live.

"With the batting, it's working out the best method to score big runs against the red ball. I don't want to lose that attacking side of my game, but I may have to be a bit more selective.

"Wicketkeeping... I've got lots of areas to improve on that as well, becoming a bit more consistent."

England have named uncapped trio Chris Jordan, Sam Robson and Moeen Ali in the squad for the Test at Lord's.

Meanwhile, Buttler has spoken about his controversial run-out in the final ODI against Sri Lanka.

Bowler Sachithra Senanayake twice warned Buttler for straying out of his crease at the non-striker's end before removing the bails and dismissing him.

"It's something I've tried to forget about pretty quickly and move on from," said Buttler.

Asked if he thought the incident was against the spirit of the game, he replied: "In my opinion, no it's not, which is probably why you don't see it happen very often. But you're well within your rights to run someone out in that way if you see fit to."