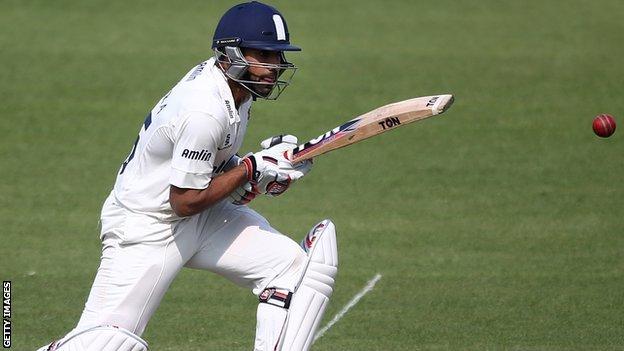 Essex batsmen Ravi Bopara and Tom Westley enjoyed an unbeaten second-wicket partnership of 229 to dominate the second day of their game with Kent.

The hosts added 33 to their overnight score as they were bowled out for 387.

Opener Nick Browne was caught in the slips to leave Essex 24-1, but from then on the visitors dominated.

Bopara (112 not out) and Westley (114 not out) took full advantage of the batsmen-friendly conditions to leave Essex 253-1 at the close.

Westley was first to reach his century, his eighth in first-class cricket, from 200 balls with 13 fours and was eventually followed by Bopara, who recently returned from one-day international duty with England.

The pair progressed with little alarm, although Bopara was dropped twice, including by Australian paceman Doug Bollinger as he attempted to clear the ropes off Adam Riley's bowling.

"It was a glorious day for batting, and although Kent posted a decent enough total in their first innings, Essex made the best of the conditions on a track made for batting.

"Ravi Bopara and Tom Westley made the Kent bowlers toil as they both made undefeated centuries in an unbroken 229-run partnership.

"They only need to add three more to in the morning to equal an Essex record that has stood for 113 years."

"Like the proverbial London bus, you wait all season for a hundred from an Essex batsmen and then two come along in the same innings.

"Westley and Bopara made the most of flat pitch and, for the most part, beautifully sunny conditions at Canterbury.

"With Bopara still knocking on the England selectors' doors, his hundred will not have gone unnoticed.

"If the pitch continues to play this well and Essex keep wickets in hand, it is hard to see the visitors declaring too much before the close on day three.

"They will want to bat once and hope the pitch deteriorates enough for the spin of Monty Panesar to become a factor on the last day."