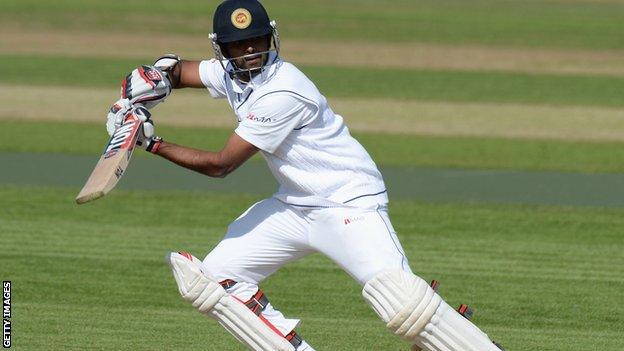 Sri Lanka say they are confident of winning their Test series in England this month.

The first of two Tests starts at Lord's on Thursday, 12 June with the tourists' final warm-up match, against Northants, ending in a draw after a rain-hit game.

"We haven't had much luck in the past, we want to win a Test series here so that is the main concern."

In their four-day game at Northampton, a draw always looked likely after Sri Lanka opted to not enforce the follow-on.

Batting first, they declared on 558-8 with Thirimanne top scoring on 156 and Kaushal Silva retiring hurt on 152.

Northants were on 146-5 at the end of the second day, but Saturday's play was washed out.

However, on Sunday they battled to 345 all out, 213 runs behind the tourists' first-innings score.

But Sri Lanka chose to bat again and reached 99-4 in their second innings when a draw was agreed.

Thirimanne said: "Batters had the chance to bat through the innings and the bowlers did well, because it was not a bowling-friendly wicket,"

Sri Lanka have never won a series of more than one Test in England and Thirimanne believes the performances from his bowlers will be crucial if they are to be successful.

He added: "It's really tough because this is the early summer and we haven't had that much practice.

"We have to take 20 wickets to win matches, that's the main thing we have to work on."

Sri Lanka's 3-2 one-day series win over England ended in acrimony after Sachithra Senanayake ran out Jos Buttler when the non-striker backed up too far in their six-wicket victory at Edgbaston on Tuesday.