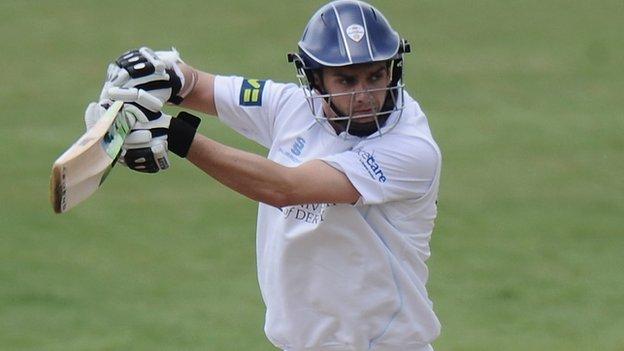 Derbyshire's Alex Hughes and David Wainwright both hit half-centuries to keep their match with Leicestershire in the balance on day two at Grace Road.

Hughes scored a career-best 60, his maiden first-class half-century, while Wainwright remained unbeaten on 83.

At the close, Derbyshire were 279-8 after 105 overs, leaving Leicestershire with a narrow lead of 32 runs.

Leicestershire, who are without a win in Division Two since 2012, had a mixed day in the field after a promising start, with Ben Raine (3-24) the best of the bowling attack.

"When Leicestershire's under-powered attack reduced Derbyshire to 115-6 in mid-afternoon, the Foxes looked likely to start their second innings with a substantial and quite possibly decisive first-innings lead.

"The key word there, however, is under-powered. On a typically flat Grace Road track, the home team did not have the firepower to force their advantage home, and Alex Hughes, David Wainwright and debutant Tom Taylor all played with patience and application against a tiring attack to drag the Peakites towards parity at the close of a long day, elongated still further by a short shower before lunch.

"The forecast for the next two days is good though, and while the wicket is unlikely to deteriorate, low bounce will become a factor on the final day. It is still all to play for."