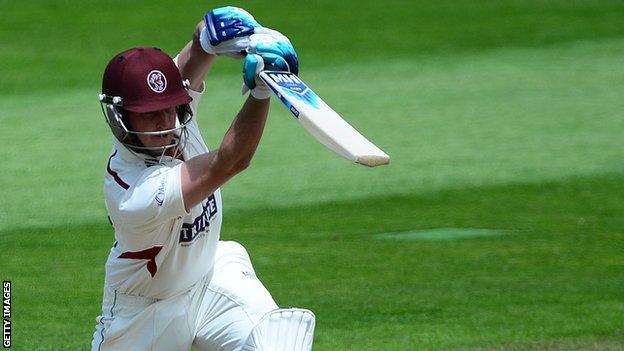 Craig Kieswetter and Craig Overton scored half centuries as Somerset recovered from 39-5 to lead by 75 on first innings against Sussex.

Ed Joyce moved to 103 before Sussex were all out for 214, but paceman Steve Magoffin (6-60) tore into Somerset, taking five wickets with the new ball.

Kieswetter's 68 steadied the hosts before Overton hit a career-best 86.

They were eventually dismissed for 289 before Chris Nash and James Anyon saw Sussex through to 26-0 at stumps.

Anyon, normally a tail-ender, was sent out as a makeshift opener for the final 11 overs because Luke Wells was unable to bat owing to a sore back.

At the start of play, Joyce soon collected the run he needed for his fourth Championship hundred of the summer, but was then lbw to Alfonso Thomas.

Magoffin, however, was right on the mark from the outset, with Marcus Trescothick, for a duck, and Nick Compton (13) among his victims.

Kieswetter stemmed the tide with his third half century of the Championship campaign, but Somerset were still in trouble at 125-7 when he was caught off Steffan Piolet.

Overton though was dutifully supported by Craig Meschede and Alfonso Thomas (both 38), before holing out to Rory Hamilton-Brown and a day that swung one way and then the other ended with the pendulum slightly in favour of Somerset.

"Steve Magoffin thrives on bowling against Somerset, achieving match figures of 12-31 at Horsham last year, and his six victims here took him past 400 first-class wickets, as he almost single-handedly dismantled Somerset.

"However, credit was due to the Somerset lower order, particularly Craig Overton, who showed great maturity and played the innings of a genuine all-rounder.

"The pitch is now playing better than at any time in the match, so taking wickets will be hard work over the next couple of days and two evenly matched sides could see this contest go all the way to the final session on the final day."