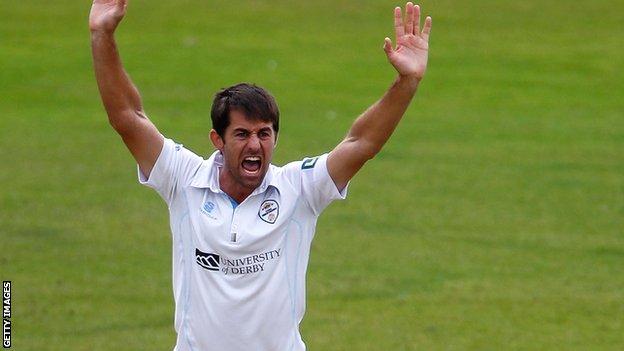 The 29-year-old reached a career-best 109 before being caught one-handed by Angus Robson in the gully off Rob Taylor as the visitors were all out for 336, a lead of 25.

He then picked up four of the first five Leicestershire wickets with his left-arm spin.

O'Brien was dropped by Mark Footitt off Tony Palladino at third man late in the day, but finally departed when he was bowled by Scott Elstone, who had earlier ended the Irishman's seventh-wicket stand of 58 with Ben Raine (19).

No other Leicestershire batsman reached 20 and with a lead of only 175, they are facing the prospect of defeat on the final day.

The sides currently occupy the bottom two places in Division two, with neither having won a game so far this season.

"It was very much Derbyshire's day at Grace Road, and in particular David Wainwright's, but the surprising extent to which the wicket misbehaved - especially when the ball was new - means Leicestershire are certainly not without hope.

"At the moment they're about 30 or 40 runs short of setting the visitors the sort of target which would really put the game in the balance, but Derbyshire are being asked to score those winning runs on what is effectively a fifth-day wicket - it was used for the T20 match that preceded this game.

"Neither of these sides has found a way to get over the line this season, and it could yet be a nerve-shredding final day for Derbyshire the more so if Alex Wyatt and Anthony Ireland can somehow dig out a few more runs for the final-wicket partnership."

"Derbyshire and Leicestershire, both without a win in the Division Two, have a chance of forcing a result on day four of this encounter.

"A second fifty on the match for Niall O'Brien in partnership with another disciplined show with the bat for Ben Raine got Leicestershire out of a hole when they were 113-6, just 88 ahead.

"Derbyshire need to break the last-wicket partnership, which is currently 14, early on day four and then see through the new ball which, on this wearing pitch, has been staying very low.

"The day was one to remember for David Wainwright; his first century in Derbyshire colours, a new career-high score, and then taking five wickets before tea."