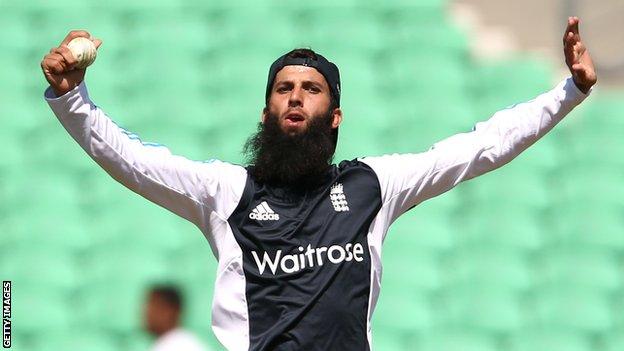 Worcestershire batsman Moeen Ali hopes to surprise people with the quality of his off-spin bowling during his England Test debut against Sri Lanka this week.

But the Worcestershire batsman is feeling "confident" and may try to fool batsmen with a doosra he has developed.

"A lot of people haven't seen me bowl in the longer format so hopefully I can surprise a few people," he said.

Moeen, Middlesex batsman Sam Robson and Sussex fast bowler Chris Jordan are all expected to make their Test debuts in the first of two matches against Sri Lanka, starting at Lord's on Thursday.

Yorkshire paceman Liam Plunkett is also likely to play Test cricket for the first time in seven years in England's first five-day outing since the 5-0 Ashes whitewash by Australia down under.

Following the retirement of Graeme Swann, England have chosen not to select a frontline spinner, with Moeen expected to share slow-bowling duties with Joe Root, another specialist batsman and part-time off-spinner.

Moeen has a first-class bowling record of 139 wickets at an average of 40, but in the past two seasons with Worcestershire he has taken 61 wickets at 30.

"I'm pretty confident with my bowling," Moeen added. "I feel like I've been doing it at Worcester for the past two or three years,"

"I'll bowl as tight as I can and hopefully pick up a few wickets from there.

"I'm not looking to fill Swann's boots. He has been a fantastic bowler. I'm just looking to bowl how I bowl. If I try to be someone else I won't be as good."

Ajmal is a specialist in the delivery, that looks like an off-break but actually turns in the opposite direction.

Former Warwickshire all-rounder Alex Loudon bowled a version of the ball against Sri Lanka in a one-day international in 2006, but no England bowler has attempted to bowl one in a Test match.

"The doosra is coming along nicely," said Moeen. "I'm really happy with it at the moment. The last 20 or 30 days I've worked my socks off bowling it so hopefully if I can get a couple of days in here before the game, maybe you will see it.

"I bowled about eight in the last championship game, and in Twenty20s I've been bowling five or six each game. So far every one's landed."

"Saaed Ajmal has helped me loads. He's pushed me, given me a lot of confidence - it does take a bit of time because you bowl a lot of full-tosses in practice.

"It's embarrassing at times. But he said he did exactly the same thing, so that gave me confidence to just keep trying to do it."

Moeen has played three one-day internationals and six Twenty20 matches for England and is relishing the prospect of walking out for his Test bow at Lord's.

"I don't think it gets better than this in international cricket, hopefully to make your debut at Lord's, I can't describe the feeling but it means a lot," he said.

"It's nice to be part of this new era. A similar thing happened at Worcester when all the big guys left. I had to step up to the plate. I thrive on this kind of situation."