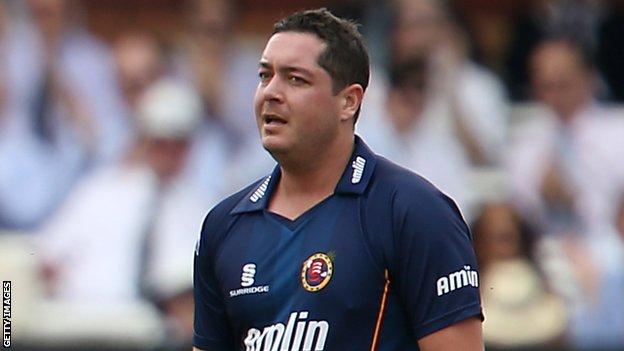 Seamer Ryder, 29, took five in each innings in this week's draw with Kent.

"He did all the disciplines right in this game and caused the batsmen problems all through the games so I'm really pleased for him."

Ryder's prowess with the bat has overshadowed his medium-pace bowling, with a 40.93 Test batting average and the joint-record for the most number of sixes in a first-class match.

Until this week he had never taken five wickets in an innings, but achieved it twice against Kent, finishing with figures of 10-110 and taking his County Championship tally to 17 for the year at an average of 12.64.

In fact it is Ryder's batting that has yet to shine during his Essex stint, failing to make a first-class or T20 fifty from four matches in each format.

"I'm sure a big score with the bat is around the corner too," said Grayson, whose side face Kent again on Wednesday in a T20 Blast match.

"He's looked very threatening at stages and not quite gone on, so hopefully in the T20 game he'll get a big score for us."