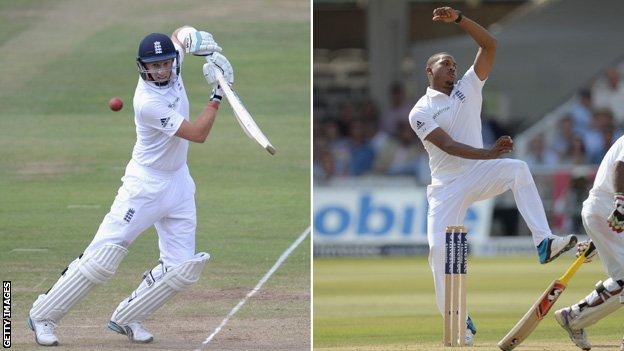 England took control of the first Test against Sri Lanka on a day when Joe Root and Chris Jordan showed they can be central figures in the side for years to come.

Root's magnificent double hundred was the cornerstone of a tremendous batting display in which England played positively and aggressively to post 575-9 - their highest total against the Sri Lankans.

Root, 23, has such determination and patience. He may look angelic, with his slight build and lovely smile, but he is a gritty so-and-so who relishes the cut and thrust of Test cricket.

To come back from being dropped in Australia, when his game was in pieces, shows great character and I am full of admiration for his effort.

"Root knows his method. He has clearly done his homework on his opposition bowlers. That's what cricket is about - knowing where you're going to score your runs. Root has done that nicely. He played with control; he wasn't expansive. He has options on the off and leg side and he is a very determined young cricketer."

Root's tireless knock allowed the lower order to come in and score freely, with Stuart Broad and Liam Plunkett both making hay in the face of some rather curious bodyline tactics from the tourists.

Broad was a delight to watch. When he's playing fluently and aggressively he is very hard to bowl at. He is actually quite a classical player and he thrives when he goes out there and plays some shots.

Jordan, meanwhile, delivered England's highlight with the ball when he struck with his third delivery in Test cricket.

As he has shown in the one-day and Twenty20 sides, Jordan is a player who makes things happen and gets people out. Like Steven Finn, he has a bit of a golden arm and could go on to become a real strike bowler in this England Test team.

In order to get him to the next level, however, I think England's coaches will need to work with him a bit in the autumn.

I spoke to Michael Holding and we both think his run up can be even quicker, with an even greater acceleration so he hits the crease hard. He is a bit leggy and laboured, but I think if they could smooth him out he could bowl even faster.

Jordan claimed the only Sri Lankan wicket to fall as England were let down by some indecision between Jordan and Gary Ballance in their new-look slip cordon and the ambiguities thrown up by television replays of low catches.

To the naked eye, Kaushal Silva looked out caught behind when he feathered Stuart Broad through to Matt Prior.

But with each slow-motion replay, the evidence became more and more inconclusive and inevitably doubts started to creep into the mind of the third umpire.

We see this situation so often with low catches. Perhaps the solution is to give the third umpire a maximum of two replays from which to make a decision.

If their first instinct was to give the player out and they can't see a clear reason to change their mind after two replays, they should stick with their initial verdict and move on with the game.

As things stand, England remain in a commanding position with Sri Lanka still requiring a further 236 runs to avoid the follow-on.

However, with next to nothing in the pitch for the seamers, part-time spinner Moeen Ali will have to show that he can hold down an end and maybe even chip in with the odd wicket.

Should Sri Lanka get on top of Moeen, England's fast bowlers will have to show great skill and patience to force a victory on this wicket.