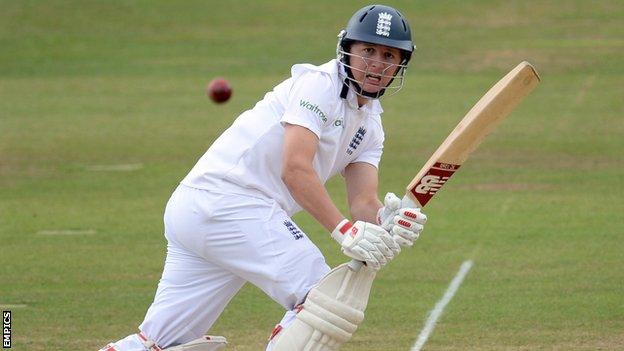 Gary Ballance said scoring his first Test century was an "indescribable feeling" and believes his innings has put England in a position to win the first Test against Sri Lanka at Lord's.

Ballance, 24, reached three figures in the final over of the fourth day with a slog-sweep into the lower tier of the Grand Stand after rescuing England from 121-6 to 267-8, a lead of 389 runs.

"It was a great feeling, I can't really describe it," said the Zimbabwe-born Yorkshire batsman. "It is what you dream about."

Should England declare overnight, they will have 90 overs to bowl out Sri Lanka for a 1-0 lead in the two-match series.

Ballance added: "We have put ourselves in a good position to win the game. Hopefully a few will keep a bit low and if we can nip one or two out we have a good chance with the attack we've got.

"I'd say to Sri Lanka: 'Get ready to bat 90 overs.' The ball has certainly done more today than on the previous three days. Sri Lanka bowled brilliantly and I hope Broad and Anderson see how full Sri Lanka bowled. England have enough in the tank now they can risk the fields. If they get driven for a few fours, so what?"

"It will be tough to bowl them out in 90 overs but Sri Lanka got eight wickets in 60-odd overs so it's possible, especially under pressure.

Brought up on a tobacco farm in Harare, Ballance left Zimbabwe at the age of 16 in 2006 and signed a contract with the Yorkshire academy the following year.

Batting at number three in only his second Test and in front of his parents and brother who had flown over from Zimbabwe, he shared partnerships of 78 and 57 with Chris Jordan and Stuart Broad to dig England out of trouble.

And, in a thrilling finale to the day, Ballance accelerated from 67 to 100 in the space of 18 balls to ensure he reached three figures ahead of a probable overnight declaration.

"When Broady came in he was quite positive and he helped me be positive," added Ballance. "I got a few boundaries away and got nearer three figures.

"With one over to go I needed three, I didn't want to nurdle around in singles, so I thought I'd go for the slog-sweep and luckily it came out of the middle.

"While Ballance is no David Gower - he's not an aesthetically pleasing batsman - he reminds me of former Australia captain Allan Border, one of the toughest cricketers of his generation."

"There's a chance we'll declare overnight but I'm not sure. That's up to Cooky [captain Alastair Cook], but I thought if there's a chance to get 100 tonight, why not try to get it tonight?"

Ballance had made his Test debut in Sydney in January in the final Test of England's 5-0 Ashes whitewash.

He was struck on the grille by Australia paceman Mitchell Johnson as he made scores of 18 and seven in England's 281-run defeat, but said the experience has helped make him a stronger person and player.

"It was a tough winter, but I learnt a lot and have come back and made some decent scores for Yorkshire," he added.

"Getting the chance to bat at number three for England is not something you are going to say no to - I'm really delighted."

Back in April, Ballance was in the Yorkshire side stunned by Middlesex when they chased down 472 runs to win the County Championship match between the teams at Lord's.

But, given that the highest successful fourth innings total at the venue is the West Indies' 344-1 in 1984, Ballance is not concerned about Sri Lanka pulling off a similar feat.

"In the Middlesex game, we obviously thought we had enough runs," said Ballance. "But that wicket wasn't starting to go up and down, this one is.

"With the pressure of a Test match and the quality of our attack, if we get a few early wickets we can really squeeze them and give ourselves a good chance of winning the game."