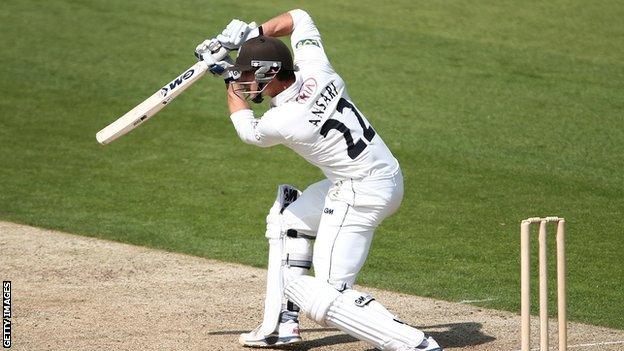 Zafar Ansari struck his maiden first-class century and Steven Davies his first hundred of the season as Surrey dominated day two against Derbyshire.

Ansari (105) and Davies (124) put Surrey in complete control as they plundered more than 300 runs in the day to close in on maximum batting points.

The pair put on 140 for the fourth wicket after Ansari and Vikram Solanki (52) helped Surrey recover from 52-2.

With Surrey resuming on 44-1, the day had started well for Derbyshire.

Teenage seamer Tom Taylor claimed an illustrious first wicket of his career, by trapping South Africa Test star Hashim Amla lbw for 27 in the fifth over.

But 38-year-old Solanki's breezy half-century - the 94th of his career - came off 65 balls as he and 22-year-old Ansari took the attack to the hosts.

Ansari, whose innings beat his previous best of 98 scored in his last match against Gloucestershire, brought up his century in style with a 12th boundary, before clipping David Wainwright to mid-wicket.

Mark Footitt (3-55) then grabbed two quick wickets, before Gareth Batty (29) and Chris Tremlett (23 not out) gave Davies lusty support with the left-hander falling just before the close to Marcus North.