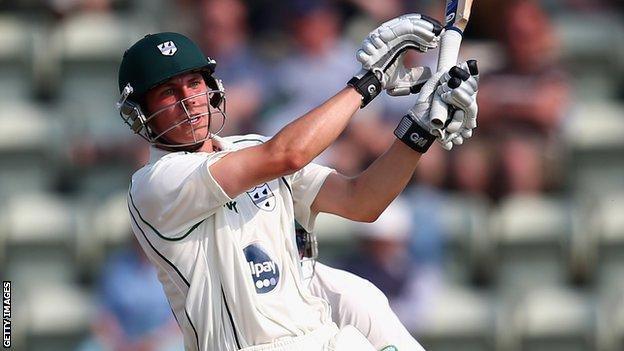 Tom Fell hit his maiden first-class century as Worcestershire piled up the runs to set Leicestershire a testing final-day target at Grace Road.

Fell shared century stands of 178 with Mitchell and 111 with Alexei Kervezee (57), while Tom Kohler-Cadmore weighed in with his maiden half-century (56).

Angus Robson and Greg Smith saw their side through seven overs of seam from Jack Shantry and Charlie Morris, before one maiden over of spin from Saeed Ajmal.

But the hosts, still without a win in seven matches this season, will still have to face the Pakistan Test spinner, the county's top wicket taker, on a final-day pitch - and would need to equal their record score in the fourth innings of a match.

For Worcestershire, Mitchell lost his private race with Hampshire's James Vince to become the first player to post 1,000 runs this season.

But his fourth Championship century of the summer has still put his side back into a winning position - quite a turnaround after being bowled out on the first day for just 237.

"A tough day at the office for the over-worked Leicestershire seamers, notably Nathan Buck and Charlie Shreck, as the wicket flattened out under the sun, but they did not help themselves with poor catching, especially in the slips.

"Dan Redfern's dropping of Tom Fell off Richard Jones, when the batsman was on just 29 early in the day, was a particularly bad and inevitably expensive miss.

"The target is, of course, purely notional at this stage, but there was encouragement in the fact that Greg Smith and Angus Robson played out the final eight overs of the day without alarm."