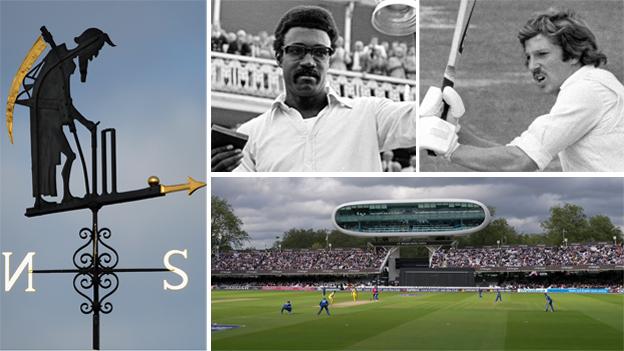 Lord's - the feted 'Home of Cricket' - is celebrating its 200th birthday as it hosts the second Test between England and India.

The north-west London venue, founded by cricketer-turned-wine merchant Thomas Lord, is home to the Long Room, the egg-and-bacon colours of Marylebone Cricket Club, the Grace Gates and honours boards on which every cricketer dreams of seeing their name.

Among a series of events to mark the anniversary was a star-studded match featuring Sachin Tendulkar, Rahul Dravid and Kevin Pietersen earlier this month.

There was no Tendulkar century - he was bowled by Muttiah Muralitharan on 44 - but he captained the MCC to victory over a Rest of the World XI led by Shane Warne.

Many great names have produced some of cricket's most famous moments at Lord's since it hosted its very first match, between the MCC and Hertfordshire.

Here, we relive 10 great Lord's moments, dig out some quirky facts and ask members of the Test Match Special team for their favourite memories of the St John's Wood venue.

After opening its doors in 1814, Lord's soon became one of London's premier entertainment venues, playing host to a range of sports including athletics, pony racing, tennis, archery and pallone, a traditional Italian ball game.

But when a side featuring WG Grace - England's biggest sporting icon of the day - defeated the touring Australians by an innings and five runs in the first Lord's Test match, its status as the home of cricket was firmly established.

Did you know? Allan Steel became the first player to score a Test century at Lord's when he made 148 in England's first innings.

Dropped by Australia for the 1896 Ashes tour, Melbourne-born Albert Trott defected to England and set himself up in county cricket. A match for the MCC against the touring Australians in 1899 gave him the opportunity to exact the most spectacular of revenge.

With one almighty swing of bat, he became the first - and still the only - player to hit the ball over the famous Lord's pavilion. "I was not very sure about it; and the next thing I saw was the ball looking like a pea in the air," he later recalled.

Trott became an umpire after his playing career, but after falling into booze and gambling, he committed suicide at the age of 41.

Did you know? England batsman Jonathan Trott's grandfather told his grandson that he was related to Albert Trott, though he is not sure how.

Australia batsman Don Bradman's ability to thrive on English pitches had been doubted in some quarters but he marked his first appearance at Lord's with a sparkling 254, an innings he rated as the best of his peerless career.

"Every ball went exactly where I wanted it to go," reflected Bradman, "until the ball that got me out." The innings remained the highest score at Lord's by a visiting player until South Africa captain Graeme Smith's 255 in 2003.

Despite being a Yorkshireman, spinner Hedley Verity will forever be associated with Lord's, where he became the only cricketer to take 14 wickets in a day in a Test against Australia.

His phenomenal performance, which included Bradman's scalp in each innings, inspired England to their only Ashes victory at Lord's in the whole of the 20th century. A captain in the Second World War, Verity died at the age of 38 in 1943 when leading his troops in Italy.

Did you know?Ian Botham's 8-34 v Pakistan in 1978 remains the best bowling figures in a Test innings at Lord's. The great all-rounder has also taken the most Test wickets at Lord's with 69 from his 26 matches.

Known as the "Middlesex Twins", Denis Compton and Bill Edrich practically set up residence in the middle at Lord's in 1947 as they thrilled post-war crowds with their batting exploits for the county side and England.

Their finest hour arrived against the touring South Africans when they put on 370 together in England's 10-wicket win. Both batsmen now have stands named after them at Lord's.

Did you know? Compton and Edrich's partnership is the highest in Tests at Lord's, with Jonathan Trott and Stuart Broad's 332 against Pakistan in 2010 the next best.

Bob Massie was a little known medium-fast bowler from Perth when he was picked for his Test debut at Lord's. But his ability to swing a Duke cricket ball round corners annihilated England as Massie picked up match figures of 16-137, which remains the best performance by an Australia bowler and the third best of all-time.

Far from being the harbinger of a great career, Massie only played five more Tests, and was dropped by his state side 18 months later. Lord's historian Adam Chadwick said: "He never went on to do much, but on that day, in those conditions, it was total carnage."

Did you know? Australia's Glenn McGrath has the best Test bowling figures by an overseas player at Lord's, and the second-best after Botham, with 8-38 against England in 1997.

Lord's was the venue for the inaugural World Cup final in 1975 and the match lived up to the occasion. West Indies captain Clive Lloyd bulldozed 102 off 85 balls and Viv Richards showed incredible athleticism to run out three players as West Indies beat Australia to underline their status as the dominant side of the era.

As jubilant members of London's Caribbean community invaded the pitch, umpire Dickie Bird's famous white cap was stolen from his head. Bird later saw it being worn by the conductor when he boarded a bus.

Did you know? Three further World Cup finals have been held at Lord's. West Indies beat England to defend their title in 1979, India won in 1983 and Australia in 1999.

England captain Graham Gooch enjoyed a golden summer in 1990 as he plundered the attacks of New Zealand and Australia. His finest hour came days after his 37th birthday when he hit 333 against India to post the highest Test score at Lord's, following up with 123 in the second innings to set a world record for the highest match total.

Not to be outdone, India showman Kapil Dev delivered another unforgettable moment when he cracked off-spinner Eddie Hemmings for four consecutive sixes to ensure India avoided the follow-on.

Did you know? Graham Gooch has scored the most Test runs at Lord's with a grand total of 2,015, almost 500 more than Andrew Strauss, the next England batsman on the list.

The admission of female members to the MCC was still five years away when betting shop manager Karen Smithies captained England to victory over New Zealand in the Women's World Cup final at Lord's.

On the day, the women were given special dispensation to change in the Pavilion and walked out through the Long Room applauded by members.

Did you know? England's Claire Taylor holds the records for the highest score by a man or woman in a one-day international at Lord's with her unbeaten 156 against India in 2006. The highest men's score is is 138 not out by Viv Richards against England in 1979.

The 100th Test to be staged at Lord's turned out to be one of its most memorable as England clung on to beat the West Indies by two wickets inside three days. The second day's play saw 21 wickets fall as England skittled out the Windies for 54 to set up a chase of 188 on a spicy pitch.

With a full house cheering every run and England debutant and number 11 Matthew Hoggard chewing through his gloves in the dressing-room, England lost their eighth wicket with 28 runs still needed, but Dominic Cork's heroic unbeaten 33 saw them over the line.

"Instead of the ebb and flow of a Test match, this was like a flash flood," says Chadwick.

Did you know? The West Indies total is the fifth lowest in Tests at Lord's. India made the lowest when England dismissed them for 42 in 1974.

Henry Blofeld: "When I was 16, I played for the Public Schools against the Combined Services. I went in with the score at 72-6 and believe it or not I finished on 104 not out. I will never forget coming into the Pavilion and the members standing to greet me. What was especially splendid was being told that one of the people in the Long Room who had particularly enjoyed my innings was no less a person than Don Bradman."

Geoffrey Boycott: "It was the 1965 Gillette Cup final and I'd just started my career with Yorkshire and England. We were put into bat by Surrey on a wet, uncovered pitch. It was very difficult to score runs, but we made more than 300. I made 146 not out and we won the match pretty easily. It is still the highest score in a one-day final at Lord's. I'm quite proud of that. I played pretty good that day."

Alec Stewart: "Scoring my first Test 100 at Lord's against Sri Lanka in 1991 is one of the best memories of my whole career. The standing ovation you get there when you do well is second to none. Whenever you walk through the gates at Lord's, whether it is to play or watch cricket, for a meeting or for dinner, it's a very special place."

Phil Tufnell: "My favourite memory of Lord's is the lunches when I was playing. People used to go wild for them. My favourite, served up by Nancy, was lamb chops followed by spotted dick and custard."