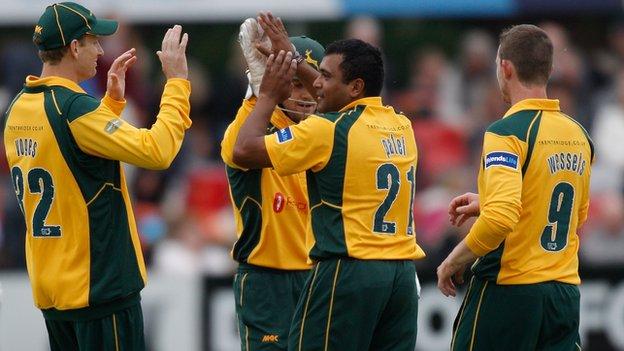 Smith then made 102, but the Foxes fell short on 196-5 to lose by eight wickets, their fifth loss in six games.

The former Durham batsman became only the fourth Foxes player to make a century in Twenty20 cricket, hitting four sixes and 13 fours in his 54-ball virtuoso performance.

But his own heroic efforts did not quite match the combined contribution of Wessels, promoted up the order to number three, and England one-day all-rounder Patel.

They plundered 20 boundaries between them. sharing a 74-run third-wicket stand after Alex Hales and Phil Jaques had got the visitors off to a sound start.

Having climbed to fifth in the North Group with their third win six matches, Notts now return to Trent Bridge on Friday evening to take on bottom side Derbyshire, who are still looking for their first win in this year's competition.