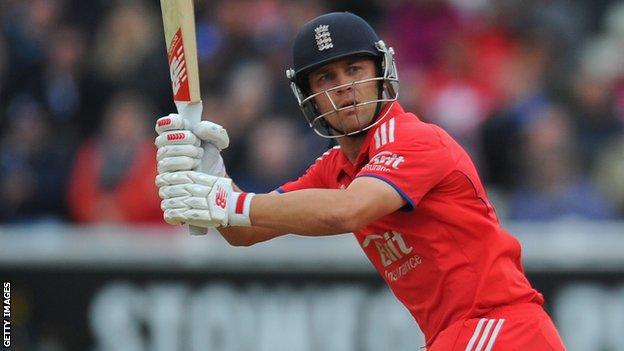 Birmingham Bears made it four wins on the trot in the T20 Blast as they beat Northants to climb to third in the North Group table at Edgbaston.

Jonathan Trott failed on his latest comeback from a stress-related illness, lasting seven balls for just a single.

But an opening stand of 95 between Varun Chopra (68no) and William Porterfield had already set the Bears on course to overhaul Northants' 133-7.

Trott on a decent trot

Shoaib Malik made an unbeaten 21 as the Bears won with 24 balls to spare.

Although Chris Wright claimed three wickets for the Bears, the star turn with the ball was Rikki Clarke, whose four overs went for just eight runs.

The Bears can now go top of the group if two results both go their way on Friday night.

In the summer's first Pears-Bears local derby, they must win at New Road against North Group leaders Worcestershire, who have won their last five games on the spin.

And they must also hope that Northants can bounce back from this comprehensive defeat to beat Lancashire in Manchester.

The inclusion of 32-year-old England batsman Trott in the Bears side for Thursday evening's game was a surprise, but justified by his recent form for Warwickshire in the Second XI.

Playing in the Second XI Championship for the first time in seven years, he hit a century last week against Durham.

Trott returned from England's winter Ashes tour after the first Test in Brisbane because of his stress-related condition.

After playing two first-class games for Warwickshire at the start of this season, he then took another break.

He took his first step towards resuming his career last month by fielding for the county in their Twenty20 friendly win over Shropshire at Bridgnorth.

"It as good to have Trotty back as we all know what's capable of. And we did well to keep it under wraps as I don't think anyone knew about it outside the dressing room.

"We put in a good all-round bowling display. I got three wickets, but it could have been anyone of us.

"We feel quite organised. We all know our jobs, everything's going well and we're now looking forward to going to Worcester on Friday night."