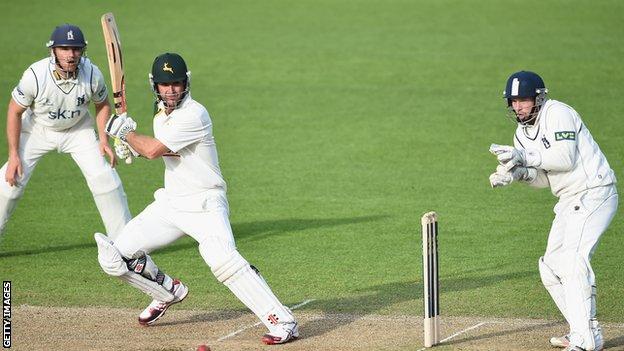 An opening partnership of 203 between Phil Jaques and Steven Mullaney put Nottinghamshire in complete control after Somerset were bowled out cheaply.

Earlier, only veteran captain Marcus Trescothick (87) showed any real resistance for Somerset as the visitors were bowled out for 168.

Nottinghamshire will look to press home their advantage on Monday and bat their Division One rivals out of the game.

"If Notts hadn't been perceived as title contenders before, then surely they must now be a force to be reckoned with.

"The classic 'Day of Two Halves' featured a ruthless display from the seam quartet, followed by a double-century stand for the first wicket.

"Somerset are still unbeaten and can't be discounted yet but Nottinghamshire fans will have every reason to enjoy this performance, having suffered so much pain at the hands of the Cidermen in recent times."