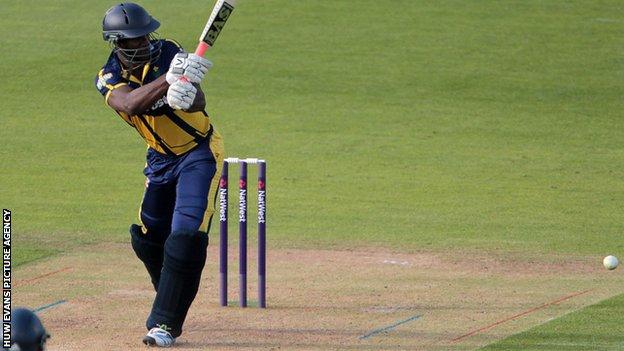 Glamorgan are currently third in their group, two points above a fifth placed Surrey.

"So far the team is playing well so we look to continue in that vein."

Glamorgan tied their last match in the competition against Kent in dramatic style after taking a wicket on the final ball.

They've only lost one of their six matches and Glamorgan coach Toby Radford said that Sammy has yet to hit top form since signing, something the West Indies star agrees with.

"Coming from India I'm getting used to the conditions, but the good thing is that I come into the side where the guys are playing really well.

"We have performances coming from everywhere which is a good sign for any team."

The 30-year-old says Pietersen will not be getting any special attention from the Glamorgan team.

"We have to continue to do what we've been doing for the past few games.

"Which is look to execute them properly and pick up the victories we need to get up to the next stage."