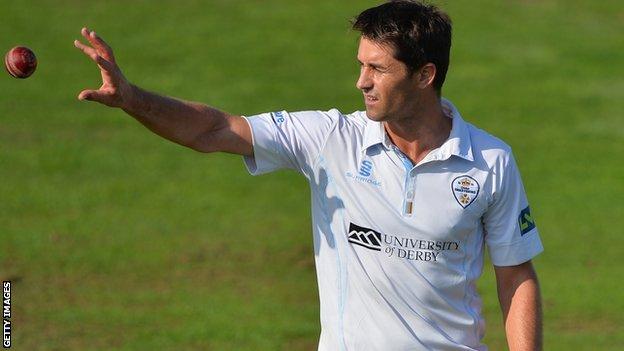 The South African seamer will join on loan until the end of the current campaign before activating a three-year contract at Taunton.

Earlier this month, the 30-year-old announced his intention to leave the County Ground at the end of the season and he has not played since.

Prior to being dropped from the squad, he was Derbyshire's leading wicket-taker with 24 this term.

Groenewald said: "I am absolutely delighted to be joining Somerset, as it is a club I've held in high regard for many years. I couldn't be happier committing the next three years to the club and I can't wait to get started."

Somerset's director of cricket Dave Nosworthy added: "Tim has been on our 'look out' list for some time and it is fantastic to be able to add him into a talented crop of quality bowlers at the club.

"His experience and performances will add real value to our team and our young bowlers, and I have no doubt that his expertise and professionalism will strengthen the team as a whole."

He has also taken 103 wickets in limited-overs formats.

Derbyshire's performance director Graeme Welch said: "Tim has been a terrific player for Derbyshire and we respect his decision to move on.

"We started discussions about a loan move immediately after Tim advised us that he would not be accepting our offer of a contract extension.

"Tim's departure also frees up some playing budget as we continue looking to strengthen the squad with seasoned pros who can win cricket matches, as well as leading and nurturing the club's emerging young talent."