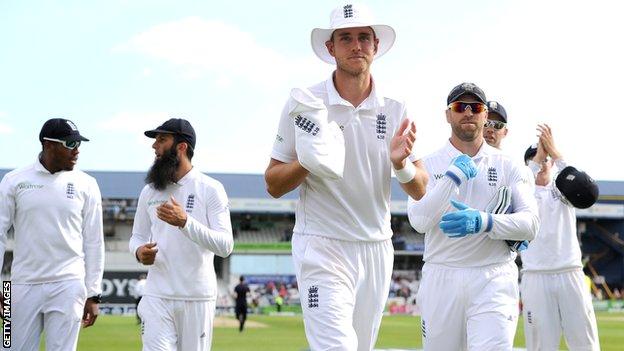 Stuart Broad became the first England bowler to take a second Test hat-trick on day one of the second Test against Sri Lanka at Headingley.

However, with the three wickets in three balls spanning two separate overs, the 27-year-old was initially unaware he had made history.

Broad had Kumar Sangakkara superbly caught at gully by Ian Bell from the final ball of the 63rd over.

From the first two deliveries of the 65th over, the seamer had Dinesh Chandimal taken at first slip by Alastair Cook and Shaminda Eranga caught behind to reduce Sri Lanka to 229-9.

Neither Broad nor his England team-mates realised he had taken a hat-trick and greeted new batsman Nuwan Pradeep with the sort of aggressive field usually only employed for a hat-trick ball.

Pradeep survived and it was not until the end of the over that Broad, England and the crowd were informed, with the bowler receiving a handshake from captain Alastair Cook.

"I heard that bloke on the Tannoy and was wondering why he mentioned the last ball of the previous over. That's when I realised it was a hat-trick," Broad told Sky Sports.

Broad, whose previous hat-trick came against India at Trent Bridge in 2011, is the fourth bowler to claim two Test hat-tricks.

Australia's Hugh Trumble achieved the feat in 1902 and 1904, compatriot Jimmy Matthews took two in the same match against South Africa in 1912, and Pakistan's Wasim Akram managed two in 1999.

It was the third Test hat-trick at Headingley.

The two-match series is level at 0-0 after the first Test at Lord's was drawn.