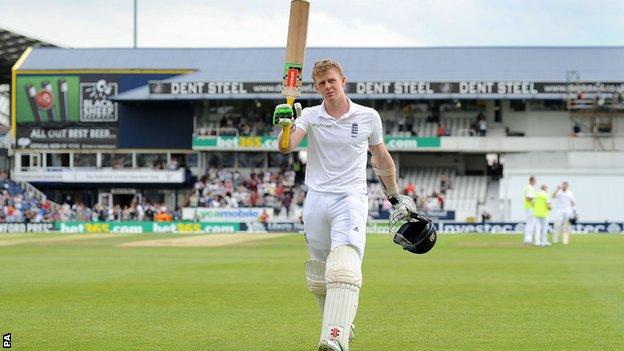 Sam Robson scored a maiden Test century before Sri Lanka fought back late on the second day of the second Test at Headingley.

But three wickets for two runs at the end of the evening session was deserved reward for a Sri Lanka attack that stuck to its task, leaving England 320-6 - a lead of 63.

That late slump was a second disappointment for the hosts, who again saw Alastair Cook fall cheaply, the captain making only 17.

England, however, can take heart from the fact they have a first-innings lead on a pitch offering encouragement to the pace bowlers, and that their position has been built on more runs from their young batsmen.

For Middlesex's Robson, 24, a first Test ton in his second appearance matched the feat of Ballance, who registered his first Test century in the drawn first match at Lord's.

Scoring almost exclusively on the off side - his century came with only one four flicked to leg - Robson regularly drove through the covers and cut behind square.

"Robson has an unusual technique in that his hands are quite far apart on the bat handle. He plays square on the off side and, as an old pace bowler, I would have been posting two gullys in the hope of getting him to slice a drive. Reducing the influence of the bottom hand is something for him to work on.

"Still, he looks a good player, not least because of his character. I liked the way he celebrated his hundred by simply removing his helmet and raising his bat. There was no leaping around or kissing the badge. It was if he was saying 'this is what I'm here to do'."

Rarely ruffled, even when the spin of Rangana Herath starved him of runs, the right-hander born in Sydney to an English mother was forced to sit through tea on 98, but returned after the break to drive Dhammika Prasad to move to three figures.

He looked to be moving through the gears - including a dance to hit Herath for a straight six - when he fell to the new ball, Nuwan Pradeep getting one to nip back and take off stump.

Much of Robson's work had been done in the company of 24-year-old Ballance, who was also strong on the cut as well as being keen to sweep the left-arm spin of Herath.

The Yorkshire left-hander overturned a Herath lbw and was dropped at short leg off the same bowler, and also seemed set for three figures.

But when Sri Lanka skipper Angelo Mathews belatedly introduced himself to the attack late in the afternoon, Ballance prodded outside off stump and gave the first of four catches to wicketkeeper Dinesh Chandimal.

If Robson and Ballance favoured steady accumulation - scoring at around 2.50 runs an over - Bell, in his 100th Test, played some eye-catching strokes either side of tea.

Yet, when he was caught down the leg side off Shaminda Eranga, it sparked the mini-collapse that dragged Sri Lanka back in to the match.

In the next over, Joe Root dangled his bat to give Mathews a feathered edge and, soon after, Moeen Ali played a loose drive to be caught behind off Eranga.

There was still time for Chris Jordan to be dropped at short cover by Dimuth Karunaratne off Prasad, but he survived until the close in the company of Matt Prior, who also offered Mathews a tough return chance.

They will return on day three looking to extend the England lead to a position from which they can win the match and the series.

That would at least ease the pressure on Cook, whose batting, in particular the familiar dismissal of being caught behind, remains a concern.

Once again, a tentative poke, at Prasad, saw him held at first slip by Kumar Sangakkara early in the morning session.

Since his century in the second Test against New Zealand on this ground last summer, Cook has scored 585 runs in 23 innings at an average of 25.