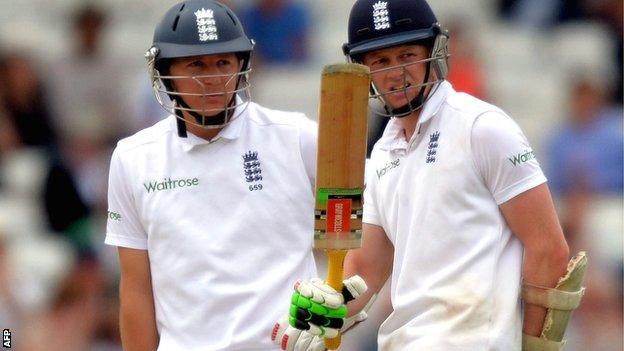 Like Gary Ballance and Joe Root's innings in the first Test against Sri Lanka at Lord's, Sam Robson's century in the second Test at Headingley was a brilliant vindication of the England selectors.

There were other candidates to open the batting, and they too could have scored hundreds, but the Middlesex man has done it in only his second Test.

They are in a good position and you would still back them to win the game but, before Robson was bowled by Nuwan Pradeep for 127, the home side were 278-2. From there, they would have hoped to end the day in an even stronger position.

"I saw enough in Robson today to show that when he gets more confidence there are enough shots in the locker, so he can go up through the gears quicker."

Robson has an unusual technique in that his hands are quite far apart on the bat handle. He plays square on the off side and, as an old pace bowler, I would have been posting two gullys in the hope of getting him to slice a drive.

Reducing the influence of the bottom hand is something for him to work on.

Still, he looks a good player, not least because of his character. I liked the way he celebrated his hundred by simply removing his helmet and raising his bat. There was no leaping around or kissing the badge. It was if he was saying "this is what I'm here to do".

The Australia-born right-hander also benefits from a very solid defence. He inspects the ball under a microscope, gets over it and watches it right on to the bat.

Ballance, himself a maiden centurion at Lord's, was on the way to a second ton before he somehow edged behind off Angelo Mathews. But even without Ballance going to three figures, it's excellent for England that the two 24-year-olds at the top of the order are producing the goods.

What will continue to concern Alastair Cook is his own form. Despite Robson's hundred, another failure by the captain will again come in to focus because his barren run has lasted for so long.

Since his century in the second Test against New Zealand on this ground last summer, Cook has scored 585 runs in 23 innings at an average of 25.

He will be aware of the problem. Cook is vulnerable to catches behind the wicket because he is not quite getting his front foot to the pitch of the ball. As a result, the blade is coming down at an angle - what Geoffrey Boycott calls "playing with half a bat".

Is it the responsibility of captaincy? It can certainly affect your batting if your leadership is coming under fire, which Cook's is from some quarters.

Is it the amount of one-day cricket he has played in the past three years? I personally don't believe it is, but that may be something England look at if Cook's problems continue.

Giving the one-day captaincy to Eoin Morgan would not threaten Cook in the same way it did the likes of Nasser Hussain and Steve Waugh in the past, so that is one option. However, I don't expect it will come to that for quite some time.

Still, until Cook gets a score, this talk will go on. You could see how desperate he was today - the sun was out, the pitch decent and the attack not the greatest. When I arrived at the ground he was in the nets, showing his desire to succeed.

What he now needs is for England to win this game and with it the series, then to go away and get lots of batting - Essex have a Championship game starting next Sunday - before the India series.

The first of those objectives was slightly complicated by the late collapse of three wickets for two runs but, even then, Sri Lanka were only highlighting what is on offer in this wicket for pace bowlers who bowl a full length on off stump.

Ian Bell, who punished every loose delivery in his 64, was also beaten regularly, looking at the pitch and shaking his head.

The reality was that Sri Lanka were simply making the most of the new ball, and you would expect a superior England attack to do the same when they come to bowl on Sunday.

If the home side bat until lunch and add another 100 runs, they will be strong favourites to take victory.

However, if they are shot out in the first hour, the game will be on.