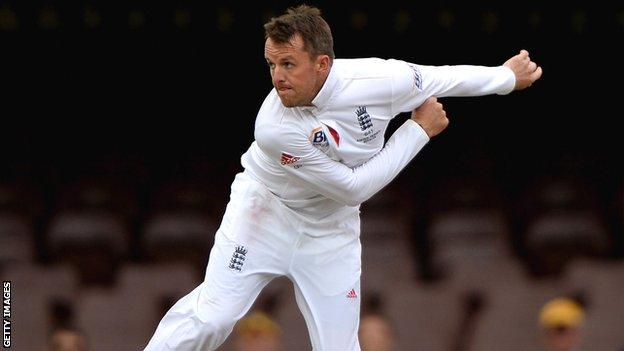 Former England spinner Graeme Swann has been asked by the England and Wales Cricket Board to work with young English spinners.

The 35-year-old retired midway through the Ashes tour last winter having taken 255 wickets in 60 Tests.

He told BBC Test Match Special: "Peter Such is the head of the spin department and he has asked me to talk to bowlers.

Asked what his role would be, Swann said: "Just to try to impart some advice or knowledge about Test cricket, because it is different to county cricket.

"I was lucky to go on a couple of tours and not play so I learned a lot then."

Kerrigan, the 25-year-old slow left-arm bowler from Lancashire, made his Test debut in the final match of the home Ashes series against Australia last year, but conceded 0-53 in eight overs in the first innings at The Oval and did not bowl in the second.

Kent's Riley, 22, is an off-spinner who has taken 24 County Championship wickets in Division Two this season at an average of 29.80, with a best of 5-78 against Surrey at Canterbury.

Borthwick, a 24-year-old leg-spinner with Durham, made his Test debut at Sydney in the final match of the 5-0 Ashes whitewash last winter, taking 1-49 and and 3-33.