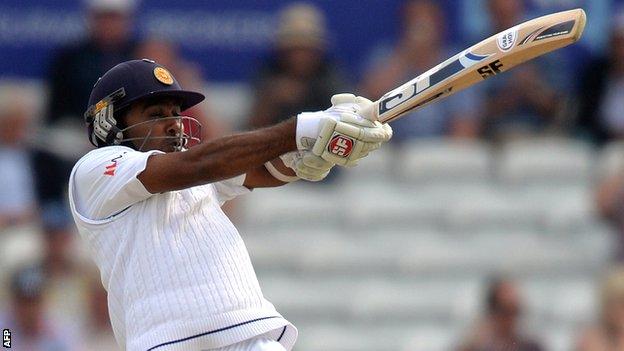 England claimed two late wickets on a third day dominated by Sri Lanka to leave the decisive second Test at Headingley in the balance.

The tourists looked to be moving towards a position of strength when Moeen Ali removed Kumar Sangakkara for 55 and Lahiru Thirimanne without scoring in the space of three deliveries.

Sri Lanka closed on 214-4 - a lead of 106 - with Mahela Jayawardene unbeaten on 55 in the company of captain Angelo Mathews.

Moeen told BBC Sport: "I haven't contributed in the batting for the last couple of innings so to get two wickets has made my day.

"With the rebuilding that is needed after their Ashes thrashing, England are a team in development and, as a result, will be inconsistent. And so, after a good second day, the home side were some distance from their best on day three.

"When Kumar Sangakkara and Mahela Jaywardene were together, it looked like Sri Lanka might even start to take the game away from England - until Moeen Ali intervened.

"But if England fail to dislodge Jayawardene and Angelo Mathews, then winning this Test could become a real challenge."

"We know if we get one wicket early we back ourselves to get through the tail."

England lost their final four wickets for a further 45 runs in the morning session to be bowled out for 365, a first-innings advantage of 108.

Although that completed a slide of eight wickets for 87, England still looked to be in a strong position.

However, they failed to make best use of the new ball and Sri Lanka wiped out the deficit for the loss of two wickets, both to the extra pace of Liam Plunkett.

As Sangakkara and Jayawardene compiled a third-wicket stand of 79, Sri Lanka looked to be gaining the upper hand on a pitch still producing enough uncertainty to suggest a fourth-innings chase in excess of 200 will be far from straightforward.

Sangakkara, scratchy in making 79 on day one, was immediately cover-driving with aplomb. In moving past 50, he became only the fourth batsman to make seven successive Test half-centuries.

But when he misjudged a Moeen off-break from around the wicket, a review could not save him from being dismissed lbw.

Two balls later, Moeen produced a beauty to beat the grope of Thirimanne and complete a pair for the left-hander.

England then thought Plunkett had trapped Jayawardene with a full toss, only for the review to be struck down.

It is Jayawardene's continued presence that will most concern England as they bid for the win that will give them the series following the drawn first Test at Lord's.

The right-hander barely scored a run in front of square, pulling and nudging on the leg side - a product mainly of the way he was targeted by Plunkett's short-pitched bowling.

The Yorkshire bowler was the pick of the England seam quartet, swinging the ball at pace to have Kaushal Silva caught behind and producing a bouncer that Dimuth Karunaratne gloved down the leg side to depart for 45.

Karunaratne should have gone earlier when he edged James Anderson to second slip on nought, but a simple chance was dropped by Chris Jordan.

Had they accepted that opportunity, England's morning might have been set on a different course but the seamers bowled too short under grey clouds suited to the new ball.

Their performance was in contrast to that of the Sri Lanka seamers, whose discipline took care of the England tail.

Matt Prior counter-attacked for 27, but when Shaminda Eranga bounced out Anderson, the wicketkeeper was out of partners.

Jordan and Stuart Broad fell to catches behind the wicket and Mathews found prodigious seam movement to bowl Plunkett and complete Test-best figures of 4-44.