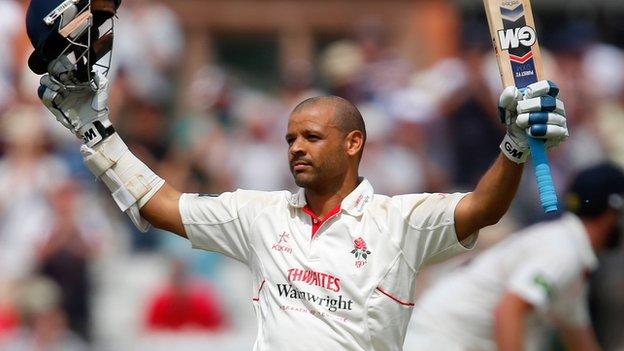 Ashwell Prince hit the highest score seen in County Championship cricket this season as Lancashire got into a winning position against Northants.

The South African batsman made a career-best 257 not out as Lancashire declared on 650-6, their eighth highest first-class score of all time.

Jos Buttler, hit four sixes on his way to 87 and Tom Smith made 79.

Glen Chapple then struck twice in his first over, finishing with 4-42, as Northants closed in trouble on 113-7.

Stephen Peters and James Middlebrook both departed third ball before Chapple returned late in the day to add the wickets of the obdurate Richard Levi and David Willey, also in quick succession.

The visitors, bottom of Division One after six defeats in seven matches, will resume on day three needing a further 387 runs to avoid the follow-on, with three first-innings wickets intact.

Resuming on 384-4, 37-year-old Prince added a further 96 runs to his overnight 161, sharing in two more century stands on top of the previous day's near record-breaking 332-run fourth-wicket partnership with Steven Croft.

He was comfortably outscored in his 138-run stand with the belligerent Buttler, who also hit nine fours in his 94-ball, 100-minute stay.

Prince then put on a further 140 with Smith, who also weighed in with two wickets as batting suddenly became a lot more difficult, to leave Northants facing 49 overs before the close.

Lancashire stood eighth in the table, 15 points adrift of safety, going into this match, having won just once in nine games.

"I was determined not to get out, to cash in and make the most of it. It's a great feeling.

"It's well known that this is my last season and that I've announced my retirement at the end of the season and to know that I can still produce my best and my highest ever score in my last season is what I want people to remember.

"Whenever I walk out I give my best for the team. I'm retiring for family reasons. My boys are getting bigger and starting to go to school. It's difficult to live for six months over here and six months over there.

"It's the first time I've been part of a 300-run partnership and that's very pleasing. The most satisfying thing is that, from 33-3, to be able to produce something to get the team out of trouble is very special."