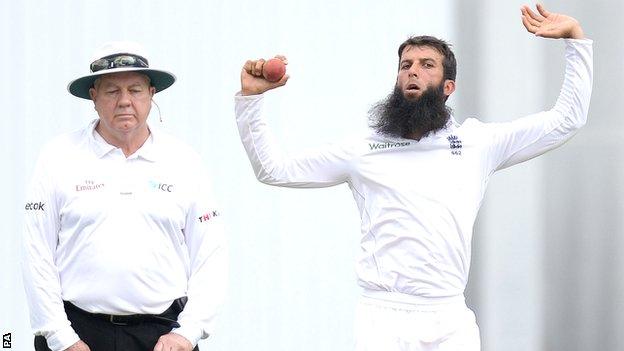 On Saturday I said that if Sri Lanka wrapped up the England tail in the first hour of the third day this second Test at Headingley would be wide open.

That is exactly what happened, beginning a disappointing day for the home side and continuing a very good Sri Lanka fightback.

The tourists sleep on 214-4, a lead of 106. England have their noses in front, but only just, and much will depend on the first session of day four.

From the position they were in just after tea on day two, England should have had this game nailed down.

"A lovely, interesting day. Sri Lanka pitched the ball up and bowled superbly this morning. If England had bowled well with the new ball, they would have bowled Sri Lanka out today.

However, thanks mainly to some very good Sri Lanka seam bowling, the hosts lost eight wickets for 87 runs, including four for 45 this morning.

With the rebuilding that is needed after their Ashes thrashing, England are a team in development and, as a result, will be inconsistent.

And so, after a good second day, the home side were some distance from their best on day three.

In helpful conditions, England wasted the new ball, bowling too short and not asking the Sri Lanka batsmen to play enough.

Things might have been different had Chris Jordan held Dimuth Karunaratne at second slip, but that was just the latest in a series of drops in this match that have highlighted England's need to improve in the field.

However, to focus on England's shortcomings would be an injustice to Sri Lanka, who themselves might not be able to believe the extent of their revival.

In the last four sessions they have outbowled the home side, which is akin to England playing on a dusty wicket in Colombo and doing the same to Sri Lanka.

When Kumar Sangakkara and Mahela Jaywardene were together, it looked like Sri Lanka might even start to take the game away from England - but that was when Moeen Ali intervened.

On the day Graeme Swann announced on Test Match Special that he would be mentoring some of England's young spinners, Moeen made an important contribution, both for himself and the state of the match.

First he trapped Sangakkara lbw with a straight ball that the great left-hander misjudged then, two balls later, produced an absolute pearler to dismiss Lahiru Thirimanne.

So far in his short Test career, Moeen has been unable to produce a big score with the bat, and in the field he's been stuck down at fine leg, away from the action.

Those wickets should make him feel like he is contributing, provide him with confidence and give captain Alastair Cook faith in the Worcestershire man.

Having said that, the turn that accounted for Thirimanne will send some shudders through the England dressing room, with Sri Lanka's Rangana Herath waiting to bowl in the fourth innings.

Because of that, a target any higher than 200 could pose problems, which is why it is vital England bowl well with the second new ball, which will be due seven overs in to Monday morning.

If they do, and the new ball proves to be as menacing as it has been throughout the match, then England have a great chance of winning the series.

But, if they fail to dislodge Jayawardene and Angelo Mathews, then winning this Test could become a real challenge.