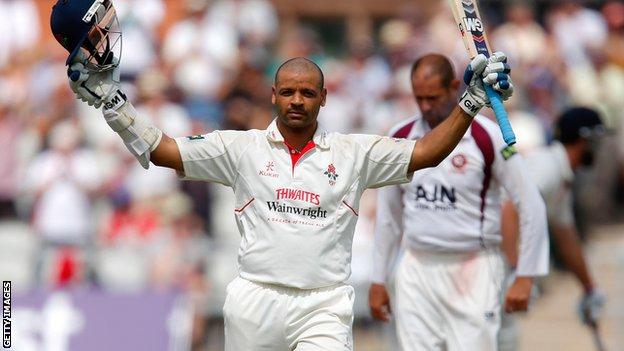 Lancashire batsman Ashwell Prince says it was a "great feeling" to score a career-best 257 not out in his final season as a player before retiring.

The 37-year-old helped his side post 650-6 declared in their Championship game against bottom club Northants.

"To know I can still produce my highest ever score in my last season is what I want people to remember," left-hander Prince told BBC Radio Lancashire.

"Whenever I walk out there, I give my best for the team."

But Prince, who played 66 Tests for South Africa, said the innings had not convinced him to carry on playing beyond the end of the county season.

"It's for family reasons," he continued. "My boys are getting big and starting to go to school. It's difficult to be in two countries for six months here and six months there."

Prince was Lancashire's leading run scorer in Championship cricket last year as the Red Rose county won the Division Two title and has 734 runs in Division One so far this season.

His eight-hours-and-20-minutes innings rescued Lancashire from a difficult position on the first morning against fellow strugglers Northants.

They were 33-3 before Prince's fourth-wicket partnership of 332 with Steven Croft (156) put the hosts in control.

Batsmen back in form

Lancashire's previous highest total of the Division One season was 325 against Yorkshire in May, exactly half of the 650-6 declared that they posted against Northants.

And, having declared once he had passed his previous best score of 254, captain Glen Chapple took four wickets to reduce the visitors to 113-7 at the end of day two.

"We were in a bit of trouble early on," added Prince. "One or two of their bowlers had the wind in their sails and had quite a bit to say, and I think that spurred me on a little bit.

"The most important thing is that it has been a good day for the team. You could have forgiven the bowlers for thinking it was going to be hard work after us getting a big score, but the bowlers put in some great effort."