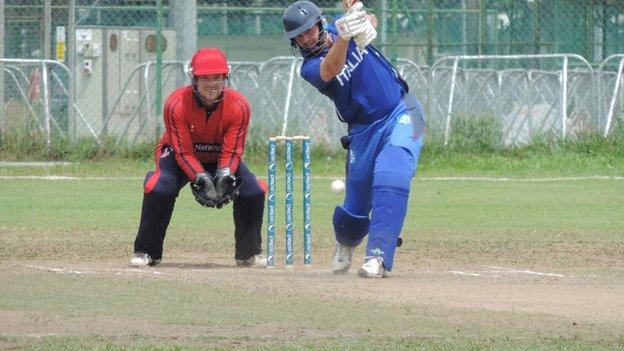 Jersey bounced back from a poor start to World League Four to beat Italy and keep alive their promotion hopes.

The match was reduced to 40-overs-a-side after a Singapore downpour and Italy were restricted to 147-9.

In reply skipper Peter Gough made 61 to put his side in control but they lost four wickets for nine runs in 20 balls to slip to 132-6.

But Sam Dewhurst and Corne Bodenstein held their nerve to see Jersey home by three wickets with three overs left.

"It feels very good to get a win under our belts," Jersey Cricket Board chief executive Chris Minty told BBC Radio Jersey.

"We made it hard for ourselves but we got there and the most important thing is winning the game and we'll look at the rest of it later, but the win is great."

An early morning thunderstorm had delayed the start of play by more than two hours but when the action got underway Jersey took two early wickets to leave Italy on 26-2.

After two defeats at the weekend against against and the Channel Islanders had more of a buzz about them in the field after Monday's rest day and Bodenstein and Charles Perchard both took impressive catches.

Teenager Jonty Jenner was pushed up the Jersey batting order to open alongside Gough and the duo looked solid until Jenner was run out for 15.

Gough hit six boundaries in his innings but when he fell to the bowling of Carl Sandri (2-37) the Jersey collapse began.

Ed Farley, Andy Dewhurst and Corey Bisson all went for single-figure scores before Jersey made it to the finishing post with 18 balls to spare.

"There was certainly a bit more go about them today, which was good, bouncing back after two defeats," Minty said.

"Winning a game today was fantastic and hopefully we can go on from here.

"Over the years we've not made a habit of bouncing back, but I think this group can bounce back and they've shown that today," Minty added.

Despite the victory Jersey remain bottom of the table on net run rate, but Tuesday's other results mean that the group remains remarkably wide open with Denmark, Malaysia and Singapore all on four points and Oman, Italy and Jersey all on two.