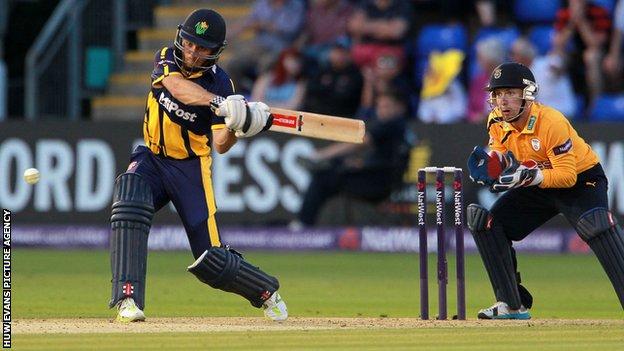 Hampshire went to the top of the T20 Blast South Group as they kept their nerve to beat Glamorgan by just six runs under the lights at Cardiff.

Michael Carberry (59) and Jimmy Adams (52) both made half centuries as Hampshire posted a par score of 170-6.

Hampshire, who won the T20 in 2010 and again in 2012, are one of only two teams to win the competition more than once in the 11 seasons of Twenty20 cricket in England.

But he holed out to a superb boundary catch from Adams at long off - and the home side fell short on 164-6.

With 14 needed off the final over, after a tight penultimate over bowled by Chris Wood (2-35), they only managed seven.

That earned a sixth win from their last seven games for Hampshire, who have recovered well from losing their opening group game at home to Glamorgan last month.

Glamorgan, who remain fourth in the group, still on course for a quarter-final place, are back in Twenty20 action on 3 July when they play bottom side Middlesex at Richmond.

Hampshire, who are top on faster run rate from Essex, who have a game in hand, play again at The Oval on Friday night when they may be up against their former player Kevin Pietersen.