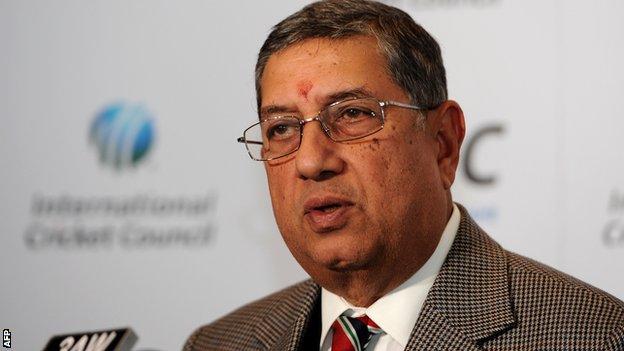 Narayanaswami Srinivasan has been confirmed as the new chairman of the International Cricket Council, despite ongoing investigations against him.

Srinivasan was suspended as chairman of the Board of Control for Cricket in India (BCCI) pending an inquiry into corruption charges over the 2013 IPL, although he denies any wrongdoing.

"I will leave no stone unturned in trying to strengthen the pillars and foundations of our sport, both on and off the field," said Srinivasan.

"I want to ensure that cricket retains and grows its popularity, and that the ICC plays a leading role in this global growth.

"I want to see more strong teams in international cricket. For this to be achieved, we all need to work hard to develop local talent in our countries."

Srinivasan's appointment was confirmed after his nomination by the BCCI, while the approval of the constitutional changes followed an ICC board resolution taken in Singapore in February and finalised on April.

As part of those resolutions, a new executive committee — which will report to the ICC board — was formed.

The BCCI suspension does not stop Srinivasan, a 69-year-old Indian industrialist, from taking up his ICC position. His third year as BCCI boss will expire in September this year.

Srinivasan was told by India's Supreme Court to step down in March while an investigation was carried out into illegal betting in the Indian Premier League (IPL).

The court has appointed a panel to investigate spot-fixing and illegal betting in the tournament.

Srinivasan, who owns the Chennai Super Kings franchise, stepped aside from his post as BCCI president in June last year after his son-in-law Gurunath Meiyappan was arrested over allegations of betting in the IPL.

Meiyappan has since been released on bail and denies any wrongdoing, while Srinivasan returned as the head of the cricket board until his suspension was imposed in March.

Kamal becomes the 11th ICC president and the first from Bangladesh, 14 years after his country became the 10th Test-playing nation.