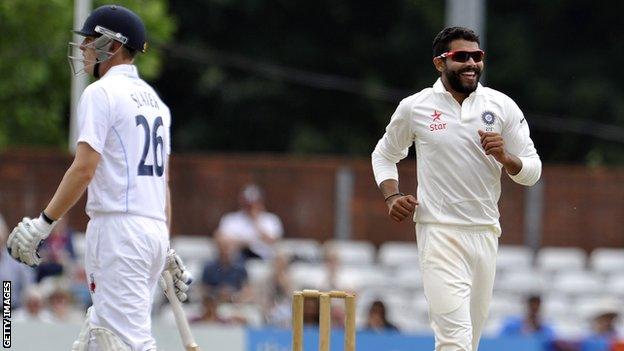 India were made to toil again in their second and final warm-up game after Derbyshire won the toss and batted through day one at Derby, making 326-5.

As in last week's draw at Leicester, India opted to utilise all 18 of their squad ahead of the first Test with England, which begins next Wednesday.

Hosein, a 17-year-old wicketkeeper from Chesterfield, hit an unbeaten 53 on his first-team debut - although the decision to allow India to draw on their full squad over the three days, and Derbyshire 12 players, will deprive the match of first-class status and Hosein of a maiden first-class fifty.

Indeed, Slater, who made 54 at the top of the order, had not appeared in first-class cricket this season, while neither Durston, whose 95 took him only 90 balls, nor Godleman, who anchored the innings with 67 not out batting at number four, had featured in Derbyshire's County Championship side since April.

More worrying for India will be that these second-string county batsmen cashed in against what was virtually their Test attack, with only Mohammed Shami not called upon as he is resting a calf injury.

Sharma, expected to lead India's pace attack in the Tests, struggled the most conspicuously.

Having sent down seven no-balls in nine overs at Leicester, he again had problems with overstepping, taking his tally for the tour to 16 in 21 overs.

Spinner Ravindra Jadeja had better luck, capturing 2-27 which helped reduce Derbyshire to 115-4 at one stage.

But the county side flourished as Godleman shared stands of 124 with Durston until the latter gave a return catch to Stuart Binny, and an unbroken 87 with Hosein.

India used nine bowlers including skipper Mahendra Dhoni who took off his wicketkeeping pads to bowl the last over of the day, and was smashed for two fours as Hosein completed his fifty.

The first of India's five Tests against England begins at Trent Bridge, Nottingham on Wednesday, 9 July.