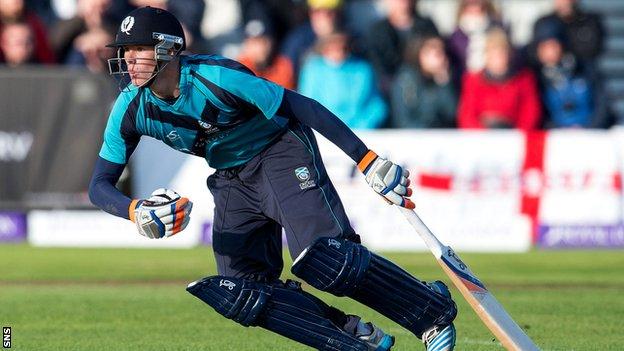 Scotland slipped to a 44-run defeat to the Netherlands in new head coach Grant Bradburn's first game in charge.

The Scots started brightly and reduced the tourists to 175-8, but the last two wickets added 77 more, with Michael Rippon hitting 49 not out, as the Dutch finished on 252-9 from their 50 overs.

Scotland were bowled out for 208 in 45 overs, despite good knocks by Hamish Gardiner (52) and Preston Mommsen (45).

The teams meet twice more, in Glasgow again, on Wednesday and Friday.

The visitors were already well on their way to three figures though, Myburgh's opening partner Michael Swart top scoring with 62 while Rippon was only denied a half century when he ran out of overs.

Gardiner and Mommsen steered the Scots to 157-2 when Mudassar Bukhari (3-21) trapped Gardiner lbw, before Mommsen and Richie Berrington fell in successive overs.

Despite that mid-innings collapse, the hosts managed to get past 200 but perished with five overs to spare when last man Evans skied Ahsan Malik and was caught by keeper Wesley Barresi.

The hosts managed to get past 200 before Evans was the last man out with just three runs when Wesley Barresi grabbed his skied effort from Ahsan Malik's delivery.

After Wednesday's second game, the three-match series concludes on Friday.

The games do not have full one-day international status as the Dutch lost their ODI status earlier this year after under-performing in World Cup qualification, although they caused some shocks at the World Twenty20 in March, beating Ireland and England.