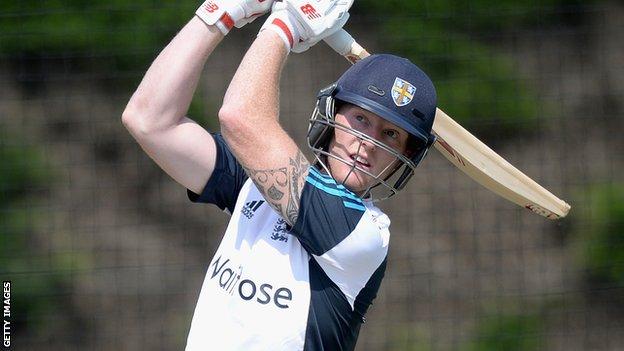 England have included Durham all-rounder Ben Stokes in a 13-man squad for the first Test against India at Trent Bridge on 9 July.

Stokes missed the early part of the season after surgery on the wrist he fractured punching a locker during England's tour of West Indies in March.

The 23-year-old is added to the 12 players on duty for the dramatic defeat by Sri Lanka at Headingley last month.

Stokes made 120 against Australia in only his second Test last winter.

That innings at Perth was one of the few highlights of England's 5-0 Ashes defeat by Australia and was their only century of the tour.

Stokes, who also took 15 wickets in his four matches during that series, returned to domestic action in May and captured career-best match figures of 10-121 against Sussex last month.

National selector James Whitaker said of his return to the international fold: "It's really good news for Ben and us. We know what he is capable of.

"We always felt he needed a quantity of cricket behind him and he has had that now. It's another seamer we can add to our pool. We are going to need a depth of seamers."

England were unable to claim the final wicket in an enthralling first Test with Sri Lanka at Lord's, and then lost the two-match series after last man James Anderson was dismissed with the penultimate ball at Headingley.

It was their first defeat in a series of more than one match against Sri Lanka, and extended their run of matches without a Test victory to eight.

"It has been frustrating lately," Whitaker added. "We have got ourselves into some good winning positions and what we need now is to seal it and get over the line.

"When we are building a new team we have to build new habits. When we get the first one I think it will spark off a lot of victories and let's hope that starts next week."

Asked about the increasing pressure on skipper Alastair Cook, Whitaker said: "As selectors we back him 100% and we trust he will get England over the line very shortly. He is very resilient, full of resolve and is determined to turn it round.

"He is building an environment that he believes can be strong and positive for English cricket and we trust him to do that."