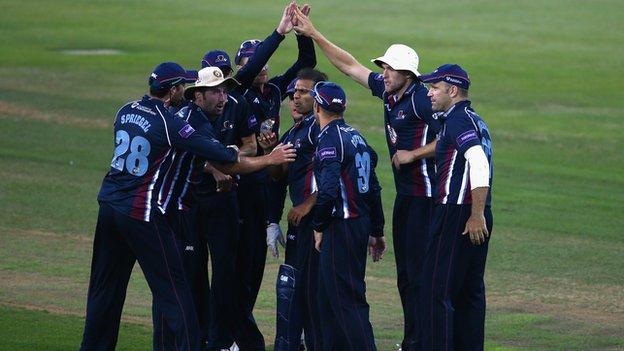 Shoaib Malik kept the Bears in it with 47 until he was seventh out on 101.

After comfortably losing their local derby to Worcestershire at New Road, the Bears also went down to a painful defeat in their next game when Derbyshire recorded their highest successful domestic Twenty20, chasing 194 to win at Derby

Northants had loan signing Adam Rossington making his debut following his move from Middlesex earlier in the day.

He provided a brief glimpse of his ability before becoming off spinner Jeetan Patel's first wicket - his 100th scalp in Twenty20 cricket.

The New Zealand international picked up two more to take 3-19 as he applied the brake in the middle overs.

The Bears, who left out recovering England batsman Jonathan Trott, have failed to get out of their Twenty20 group for the past two summers.

Although they are four points adrift of the top-two finish needed to secure a home tie in the last eight, Dougie Brown's side are only a point behind fourth-placed Yorkshire.

They now host second-placed Lancashire at Edgbaston on Friday night.

Northants stay seventh, now only a point behind the Bears ahead of Friday's trip to Grace Road to face Leicestershire.