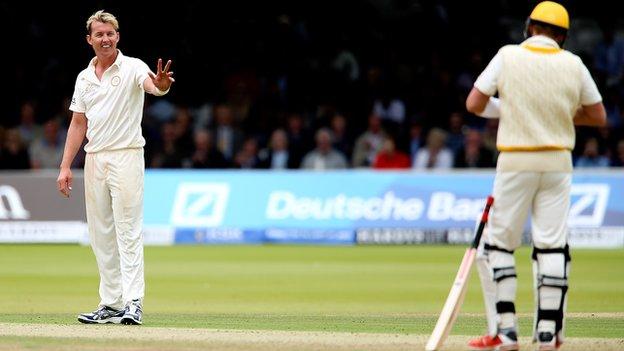 Shane Warne had his hand broken by a Brett Lee beamer as the MCC beat the Rest of the World by seven wickets in a Lord's bicentenary celebration match.

Rest of the World captain Warne was hit by his former Australia team-mate in the final over of his side's 293-7, in which India's Yuvraj Singh struck 132.

Sachin Tendulkar made 44 and Brian Lara 23 before Finch finished the match with a six with 25 balls to spare.

The match was played to mark 200 years of cricket at the current Lord's ground, the third to take the name of businessman Thomas Lord, who founded the original Lord's venue in 1787.

"It was a great day and a fantastic atmosphere," said leg-spinner Warne, who took 708 Test wickets.

"I haven't seen Binga [Lee] for a while, so it was nice of him to say hello and put me out for six weeks. He didn't mean it, it's just one of those things that happens."

Warne arrived at the crease after Yuvraj rescued the Rest of the World from 68-5, a collapse induced by Pakistan off-spinner Saeed Ajmal's 4-9.

Ajmal's victims included former England batsman Kevin Pietersen, who was stumped for 10 and the subject of derogatory comments from his ex-captain Andrew Strauss, for which Strauss has apologised.

With Ajmal's brilliance threatening the spectacle, he was withdrawn, allowing Yuvraj to rebuild with stands of 131 with Paul Collingwood (40) and 84 with Peter Siddle (33 not out).

When Yuvraj fell to the bowling of MCC captain Tendulkar, Warne came to the crease and suffered the blow that would prevent him from taking the field in the second innings, with the 44-year-old appearing on the dressing-room balcony with his hand in plaster.

Without him, the Rest of the World were punished by Australian Finch, who added 107 for the first wicket with Tendulkar, then 67 for the second with Lara.

When Lara edged Collingwood behind, the former England all-rounder bowled Rahul Dravid with the next delivery.