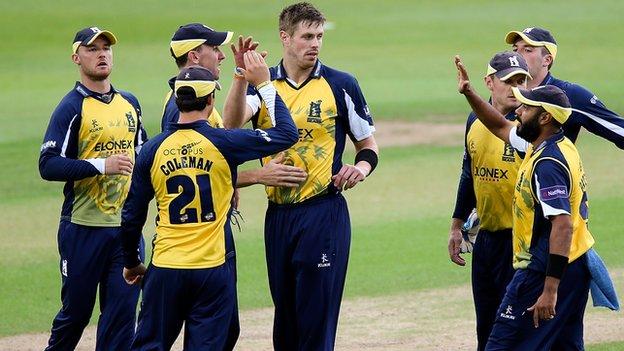 Birmingham Bears still believe they can qualify for the T20 Blast quarter-finals despite a recent slump in form.

Going into their first local derby of the season against Worcestershire three weeks ago, the Bears had a chance of going top of the North Group.

But defeat at New Road that night triggered a run of four defeats in five games - and the other was washed out.

"Worcester are above us and any team that are above you who you can take points off is massive.

"We have to get two points from that and then see where we're at."

The Irishman acknowledged that Tuesday's narrow six-run home defeat by Nottinghamshire, who are now up to second in the North Group, was one that got away.

But, with all-rounder Chris Woakes back from England 12th man duty, Friday night's return clash with Worcestershire, who are four points above them, is a chance to make amends.

"It was disappointing against Notts when we know we could have won," added Porterfield. "It is tight now. but we now have to pick ourselves up for Friday."

The crazy nature of the fixtures means it's not easy. There's no rest time, no down time, no preparation time

The Bears are weakened by the loss of Pakistan Test star Shoaib Malik, who has played the last of his six scheduled matches, and it is not clear whether Jonathan Trott will be considered.

But Worcestershire, for whom Shoaib's Pakistan team-mate Saeed Ajmal plays the last of his 12 matches, are weakened by the loss of England's Moeen Ali.

"Twenty 20 is all about small margins," Bears director of cricket Dougie Brown told BBC WM. "And we've lost two home games to the weather, which has not helped.

"We've made it very difficult for ourselves, but there's still all to play for."

Before the Bears' rain-off against Lancashire last Friday, Brown's players had enjoyed just four days off in the last 32, two of which were spent travelling to their next venue.

"I'm not trying to make excuses," added Brown. "But there is a reason why my players have looked a bit jaded.

"This schedule has been unbelievable. We know it's our jobs, transferring our skills from one competition to another. But the crazy nature of the fixtures means it's not easy. There's no rest time, no down time, no preparation time."