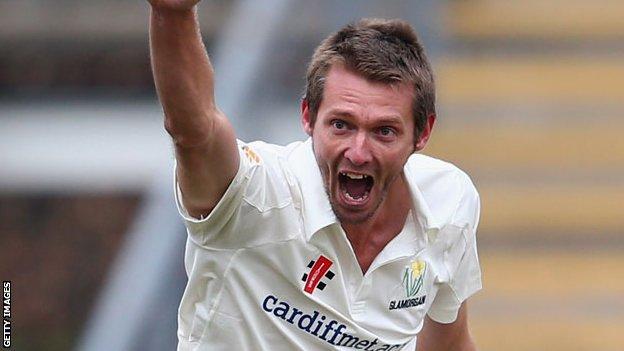 Michael Hogan said he did not feel the pressure when bowling the final over to help secure a dramatic win for Glamorgan in the T20 Blast at Surrey on Friday.

The hosts needed 13 off the last six balls to win at the Oval, but fell four runs short on 188-4.

Victory moves the Welsh county up to third in the group.

"I wasn't really thinking too much about the pressure, just listening to the crowd," said Hogan.

"I was just listening to the noise, having a bit of fun and knowing my skill."

Glamorgan posted 192-4 in their innings as Jacques Rudolph hit an unbeaten 75 and Chris Cooke blasted 43 from 23 balls.

In reply former England batsman Kevin Pietersen made 20 off 17 balls before he holed out to Ben Wright on the boundary, off the bowling of Adam Salter.

Jason Roy smashed 60 off 41 balls for Surrey, but his dismissal in the 17th over swung the momentum of the game.

"I think we just played for our team more than individuals," said Hogan.

"Everyone wants to do the right thing for each other, we've got a good attitude in the group.

"We're playing for our team and it's going really well at the moment."

Surrey drop to fourth in the South Group table, one point behind Glamorgan with a game in hand.