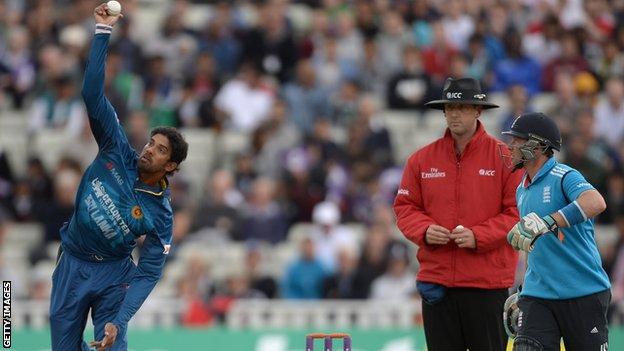 Sri Lanka off-spinner Sachithra Senanayake has been banned from bowling in international cricket.

The International Cricket Council (ICC) found he bowled with an "illegal" action, after he was reported following a match against England in June.

Bowlers are not allowed to straighten their arm by more than 15 degrees.

Senanayake, 29, can seek a hearing from a bowling review group made up of experts appointed by the ICC, who would vote on the legality of his action.

They would review evidence and decide by a majority vote.

Senanayake was reported - for the second time in his career - by umpires Ian Gould and Marais Erasmus following Sri Lanka's victory in the fourth one-day international at Lord's on 2 June.

He failed an assessment of his action during a test conducted at Cardiff Metropolitan University.

A statement from Sri Lanka Cricket said: "The report concludes that Sachithra bowled with an illegal bowling action and consequently he is banned from bowling in international cricket.

"This matter will be referred to the Sri Lanka Cricket (SLC) committee for their recommendation."

Senanayake can continue to play domestic cricket under the supervision of the SLC, and can apply for a reassessment of his action after remedial work. However, he will be given a one-year ban if he fails a second assessment.

Senanayake, a limited-overs specialist having played only a single Test, was reported in 2011 on a tour of England with Sri Lanka A. He worked with coaches in his homeland to remedy his action, and was subsequently cleared after undergoing biomechanical testing in Perth.

Off-spinner Muralitharan, whose action was twice called into question, retired from Test cricket in 2010 as the all-time leading wicket-taker with 800 victims.