James Anderson's previous Test innings ended so miserably it reduced him to tears.

Having survived for 20 overs without scoring a run to take England to the brink of an unlikely draw against Sri Lanka at Headingley, England's number 11 was dismissed by the penultimate ball of the match.

Feeling he had let down his team, when asked about his efforts by Michael Atherton at the post-match presentation, he could barely get a word out.

Three weeks later at Trent Bridge, the only man in danger of crying was India captain MS Dhoni as Anderson played a starring role in a morning of barely believable mayhem.

A year and a day after Ashton Agar's heroics on the same ground, Lancashire's Anderson scored 81 runs - the highest score by an England number 11 - and with Joe Root put on 198 to set a new record for a 10th-wicket Test partnership.

And to the utter delight of a packed Saturday crowd at one of Test cricket's most atmospheric venues, a match that had appeared moribund for three days was brought kicking and screaming back to life.

By the time Anderson was out soon after lunch to bring the England innings to an end, his achievement was the talk of social media while the odds on him becoming Sports Personality of the Year were slashed from 100/1 to 25/1. 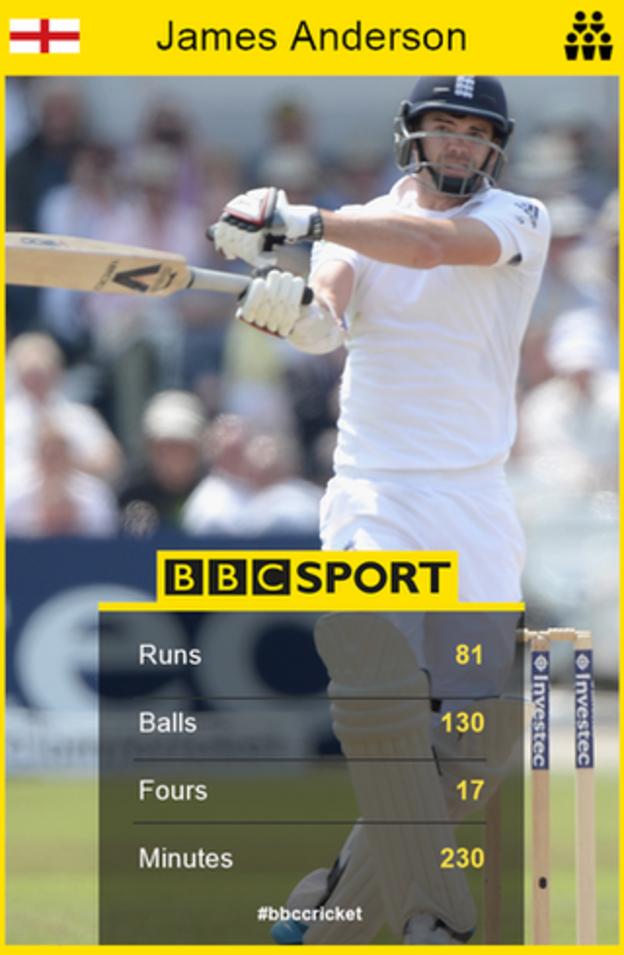 "I never thought I was capable of getting a score like that," admitted Anderson afterwards.

"There were a couple of mix-ups running between the wicket, when I set off and got sent back, but on the whole we did it really well. Joe is a young lad but he played it with great experience.

"He talked me through every ball of my innings, and I talked him through most of his as well. I enjoyed every minute of it.

"It was disappointing at Headingley, you do have those moments, but that makes you want to cherish these moments even more."

There had been little sign history was beckoning when Anderson, 31, had walked to the crease to join Yorkshire's Root on Friday evening, with England on 298-9 in reply to India's 457.

And even though the pair survived to add 54 before the close, it was bowling rather than batting that Anderson was practising on the outfield on Saturday morning.

When he reached 35 it was his highest Test score and when he passed 37 it was his best effort in 168 first-class games.

By the time he brought up his half-century with the first pull shot of his innings and possibly his career, it was his top score in all competitive cricket - beating an unbeaten 49 scored opening the batting for Burnley in the Lancashire League.

By now, Anderson was in such unchartered territory he looked totally lost as to how to celebrate his landmark. Eventually, matters were taken out of his hands by Root - who walked up to his team-mate and engulfed him in the sort of bear hug that is usually reserved for Test match victories.

"Joe came down the wicket and said 'milk it'," added Anderson. "I didn't really know what that meant so I just did the round with the bat. I've seen people point at the dressing room so I did that as well."

In some ways, it was a victory of sorts for beleaguered captain Alastair Cook, who had been pilloried by pundits and supporters for his lack of imagination when India's final pair had amassed 111 on day two.

There is nothing more headache-inducing to a Test captain than a last-wicket partnership, but this time it was Dhoni who was reaching for the pain-killers.

At one point, when Murali Vijay showed all the mobility of a chest of drawers to miss a pretty simple chance, Dhoni was so livid he ran off the pitch, bringing the drinks break forward by 10 minutes.

When the India skipper crowded men around Anderson's bat, the batsman simply improvised to loft the ball over the infield, at one point clearing the slips with a deft uppercut for four.

And when Dhoni pushed back his men to encourage Root to take singles, the Yorkshire batsman simply declined to run - a tactic that prompted pantomime boos from the crowd.

With Test Match Special statistician Andrew Samson struggling to keep up with all the milestones, Anderson went past John Snow's 59 not out to set a new record for an England number 11 before the partnership reached 130 to eclipse England's all-time best, set by Tip Foster and Wilf Rhodes in 1903.

When lunch was delayed by half an hour, it was ostensibly to give India time to take the final wicket. In fact, it merely gave Anderson and Root the time to write themselves into the record books.

Their 164th run brought yet another ovation and the biggest cheer of all from the crowd, many of whom had probably been here a year ago to watch debutant Agar and Phil Hughes break the previous record of 151.

During the interval, all the chat was about whether Anderson could get the 19 runs needed to become the first number 11 to reach three figures. And perhaps the opportunity to reflect on his achievements proved Anderson's undoing as, soon after the resumption, he edged Bhuvneshwar Kumar to slip to bring an unforgettable partnership to an end.

"I'm disappointed not to get a 100," admitted Anderson. "I should have left that one but I gave it the kitchen sink and managed to get an edge. Joe got all the luck today with playing and missing.

"I'd imagine that is the closest I will get to a 100. You never know, but I very much doubt I will get anywhere near that again."

As one member of the press box pointed out Anderson had now scored more Test runs in 2014 than Cook - his one-time mentor in a buddy system for tail-enders - the 31-year-old sprinted back to the dressing-room to get ready for his day job.

And it didn't take long for his mood to be transformed as Matt Prior dropped an early chance off his bowling to reprieve first innings centurion Vijay.

In an instant, it was back to the old Jimmy Anderson: eyes narrowed, shoulders rounded, scowling and sinister as he returned to his mark.

A grumpy fast bowler for ever. But a batting hero for a day.