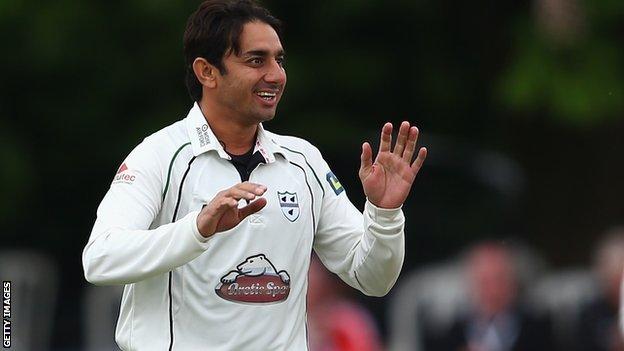 Worcestershire added just four to their overnight total before losing their final wicket to be dismissed for 321.

Despite half centuries from Greg Smith (85) and Dan Redfern (57), the visitors made just 280 in reply.

The hosts lost in-form opener Darryl Mitchell for four before closing on 48-2 in their second innings, 89 ahead.

Having been the hosts' highest scorer in the first innings, with 90, Mitchell was caught by keeper Niall O'Brien off Nathan Buck in the fifth over before Tom Fell followed without scoring just four balls later.

Pakistan international Ajmal's four-wicket haul comes in what is expected to be his final County Championship match of the season.

The spinner, who is the competition's top wicket taker this season, will link up with his national team for their mini-series with Sri Lanka.

"We were in a good position to take a lead.

"Looking back over the innings, I think the three wickets before tea was the period where it just fell away from us.

"Then when you have a world-class performer (Saeed Ajmal) at one end, building pressure to get bowlers wickets at the other end, it's very difficult to try and pull away.

"I don't think we've given our wickets away. We may have got a little bit lax against the seamers but that's the pressure he builds."