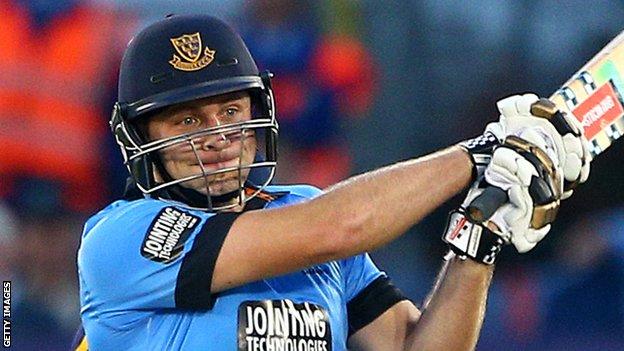 Luke Wright's superb unbeaten century proved to be in vain as Sussex suffered a six-run defeat by Hampshire, who have qualified for the quarter-finals.

The England all-rounder smashed 116 not out off 66 balls, but with 17 needed off the final over, the Sharks could only muster 10 and finished on 171-8.

Earlier, Michael Carberry hit 87 not out for Hampshire and Jimmy Adams struck 52 as the hosts made 177-3.

Despite wickets falling at regular intervals for the Sharks, with spinner Danny Briggs taking 4-28, the game was always alive while Wright was at the crease as he blasted 13 fours and four sixes in an innings which was one short of his Twenty20 best.

After Chris Liddle managed to scrape a leg bye to get Wright on strike, he could only hit one four as Sussex fell short.

Hampshire will now be looking for a victory in their final South group game at leaders Essex on Tuesday to give themselves a chance of securing a home quarter-final, but Surrey will claim the home tie if they win their final two games.

"Michael Carberry and James Adams turned the match around for us with a great partnership. It made a huge difference after losing the two early wickets.

"Danny Briggs, Will Smith and Liam Dawson all bowled superbly when Luke Wright was threatening to win the match on his own.

It is a great achievement to reach the quarter-finals six years in a row."