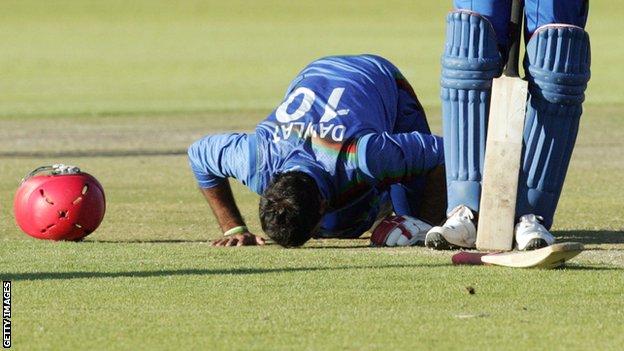 Afghanistan were surprise two-wicket victors over Zimbabwe in the third game of their four-match one-day international series in Bulawayo.

Chasing 262 to win, the Afghans needed 61 from the last five overs but Dawlat Zadran (24 not out) secured victory by smashing a six with two balls to spare.

It is only the second win over a Test-playing nation for Afghanistan, whose national team was formed in 2001.

They beat Bangladesh in the Asia Cup in March, also in the 50-over format.

Zimbabwe had won the first two games, and posted 261-8 - their biggest score of the series - thanks to Hamilton Masakadza's 84 and good knocks by captain Brendan Taylor (53) and Sean Williams (49).

But Javed Ahmadi (56) and Usman Ghani (43) added 83 for the first Afghanistan wicket, while Samiullah Shenwari (41) and captain Mohammad Nabi (42) kept the visitors in touch.

With 46 needed from 24 balls, Nabi pulled Sikandar Raza for two sixes off the first two balls of the 47th over before being run out, which brought Zadran, better known as a seam bowler, to the crease at number nine - and he hit two more sixes to round off the over.

Despite another run-out accounting for Sharafuddin Ashraf in the next over, Zadran helped himself to two more maximums as his unbeaten 24 - all in sixes - came off only seven balls to secure a famous victory.

Afghanistan joined the International Cricket Council as an affiliate member in 2001, after many of the original players had learned the game in refugee camps over the border in Pakistan.