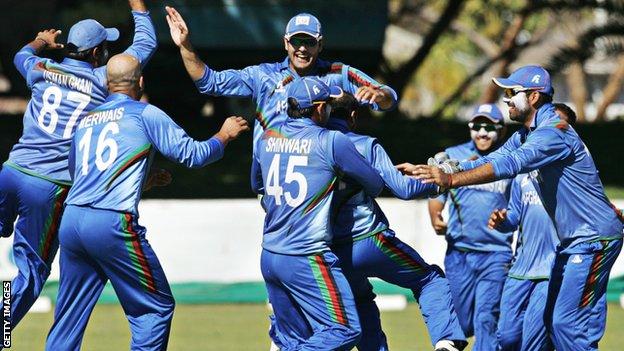 Afghanistan thrashed Zimbabwe by 100 runs in Bulawayo to draw their one-day international series 2-2.

It was only the third win over an International Cricket Council full member by Afghanistan, who were taking part in their first bilateral one-day series against a Test-playing side.

Shafiqullah top scored with 56 as the Afghans were bowled out for 259.

A huge win was in prospect as Zimbabwe slumped to 29-6 but despite a late rally, they were dismissed for 159.

Zimbabwe keeper Richmond Mutumbami hit a valiant 64 on his ODI debut at number eight when the hosts looked in danger of being skittled for well under 100.

But he fell to teenage spinner Sharafuddin Ashraf, who took 3-29 as Zimbabwe were bowled out with 12 overs to spare.

Earlier, seamer Donald Tiripano took a career-best 5-63 for Zimbabwe but it was Afghanistan who will be celebrating after losing the first two matches but coming back to square the series.

Afghanistan, whose national team was formed in 2001, have now recorded three wins over full members this year, following their historic victory against Bangladesh in the Asia Cup in March.

They are due to take part in their first World Cup next year, which is being staged in Australia and New Zealand in February and March.

Their progress bodes well for the future after the ICC introduced a play-off system earlier this year which will, eventually, give the top-ranked associate member such as Ireland, Afghanistan or Scotland the chance to play Test cricket against the lowest-ranked Test side - likely to be Zimbabwe or Bangladesh.